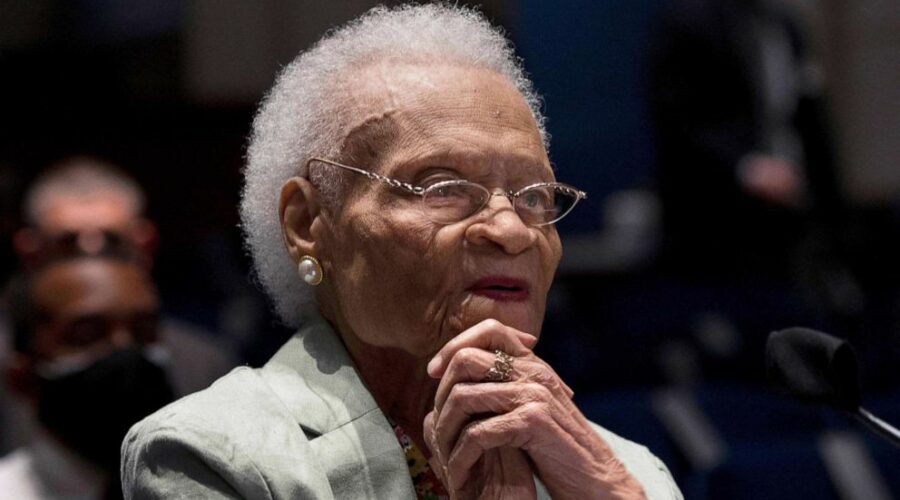 Three survivors of the 1921 Tulsa Race Massacre, now more than 100 years old, made dramatic appeals to lawmakers Wednesday for reparations and acknowledgment of what happened to them when a white mob attacked a predominantly Black neighborhood in Tulsa, Oklahoma, changing their lives forever.

“I still see Black men being shot, Black bodies lying in the street. I still smell smoke and see fire,” 107-year-old “Mother Fletcher,” as she is affectionally known, recounted in a halting voice. “I still see Black businesses being burned. I still hear airplanes flying overhead. I hear the screams. I have lived through the massacre every day. Our country may forget this history, but I cannot. I will not, and other survivors do not. And our descendants do not.”

She and the other survivors spoke before a House Judiciary subcommittee considering possible legal remedies to compensate massacre survivors and their descendants almost 100 years after the Greenwood District of Tulsa, known as the “Black Wall Street,” was stormed on May 31, 1921.

Fletcher, who made her first trip to Washington to tell her story, never finished school beyond the fourth grade, she said, because the attack displaced her family, and without an education, she never made much money.

“No one cared about us for almost 100 years. We and our history have been forgotten, washed away. This Congress must recognize us, and our history — for Black America, for the white Americans and for all Americans,” Fletcher said.

The lawmakers, Democrats and Republicans, rose to give her a standing ovation.

Democratic Rep. Sheila Jackson Lee of Texas, a co-sponsor of a bill to recognize the Centennial congressionally and vocal advocate for reparations, videotaped part of Fletcher’s opening testimony on her iPhone, in apparent awe of the survivor. Jackson Lee is also a co-sponsor of H.R. 40, a bill which is awaiting a full House vote and would establish a commission to study reparation proposals.

Hughes Van Ellis, a few months old at the time, and now a World War II veteran who dons an Army hat and goes by “Uncle Red,” choked up during his testimony, telling lawmakers he lives with memories of the Greenwood neighborhood and the “thought of what it could have been.”

“We aren’t black and white pictures on a screen. We are flesh and blood. I was there. I’m still here,” he said. “I’m not asking for a handout. I’m asking to be treated like a first-class citizen,” he added.

Lessie Benningfield Randle, 106, appeared via video call, but was no less dramatic. She described seeing dead bodies float into the Arkansas River as her family fled for their lives, recalling how they were not protected from officials and those who “were filled with so much hate … for no reason except that we are Black people.”

“We have waited too long, and I am tired,” she said. “We are tired. Lastly, I am asking you today to give us some peace. Please give me, my family and my community some justice.”

The survivors and their families last year filed a lawsuit demanding compensation for they called the ongoing “public nuisance” inflicted on them and other families for decades by the tragedy, Democrats made the same point — that the personal and economic losses lasted well beyond 1921.

“In short, present day racial and economic disparities in Tulsa can be traced back to the massacre. In America, Tulsa is a microcosm of what has happened to the African American community in this country,” Rep. Steve Cohen, D-Tenn. said. “Congress needs to step up.”

Rep. Jerry Nadler, chairman of the House Judiciary Committee, also asked his colleagues to acknowledge that history here had been whitewashed, calling the massacre “an act of ethnic cleansing, which was subsequently wiped from the history books for many decades, despite having made national news at the time.”

In a rare agreement, lawmakers allowed the centenarians to testify without asking questions, Republican Rep. Mike Johnson of Louisiana saying, “we don’t have many centenarians testified before our committee so this may be — I would suggest that maybe we may be making history here today.”

After hearing from the survivors, lawmakers heard from experts on the longstanding impact of the massacre. They argued that not only did law enforcement fail to protect Tulsa’s Black residents but the city’s chamber of commerce and insurance companies — which falsely painted the massacre as a riot — made it impossible for the community to recover.

The state of Oklahoma originally recorded 36 deaths, but a 2001 commission reported the number killed was a high was as high as 300 — and recommended reparations be made, which Jackson Lee said would equal about $200 million in 2021.

Speaking to the survivors, she demanded Tulsa Mayor G. T. Bynum, a Republican, give them and their descendants the resources to pursue their claims.