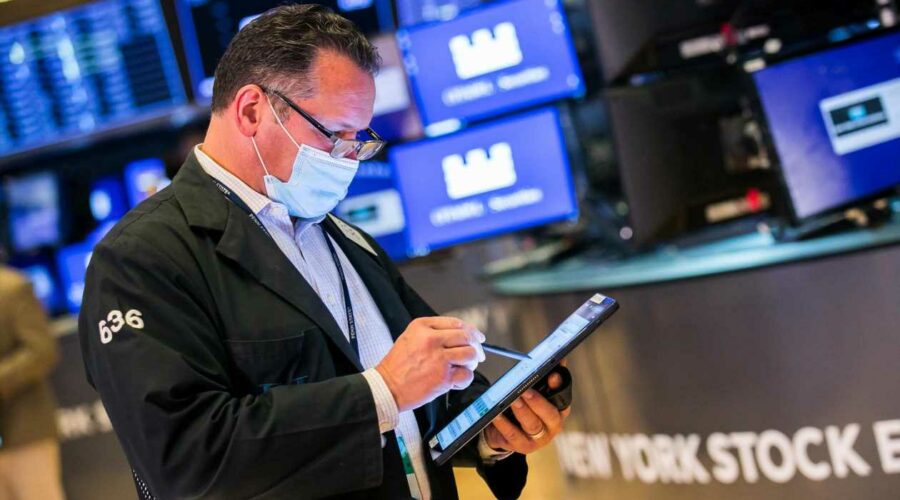 Dow futures dropped Thursday, one day after the 30-stock average closed off 265 points, or nearly 0.8%, as the Federal Reserve moved up its timetable on interest rate hikes. The Dow on Wednesday afternoon had been down as much as 382 points during Fed Chairman Jerome Powell's post-meeting news conference, which started 30 minutes after the 2 p.m. ET release of the central bank's policy statement and projections. (CNBC)

The Fed on Wednesday left rates unchanged and made no mention of adjusting its massive Covid-era bond-buying quantitative easing program. Looking ahead, central bankers indicated two rate hikes in 2023. In March, they had expected no rates increases until at least 2024. The Fed on Wednesday also raised its inflation expectation to 3.4%, but stuck with the "transitory" language. (CNBC)

Taking a step back from Covid-era lows, the Labor Department reported Thursday morning that initial jobless claims rose to 412,000 last week. Economists had expected 360,000. Two weeks ago, new filings for unemployment benefits went below 400,000 for the first time since March 2020. (CNBC)

IN THE NEWS TODAY

A bipartisan senators' group working on a $1 trillion infrastructure compromise has more than doubled to 21 members, a key threshold giving momentum to their push as President Joe Biden returns from overseas at a pivotal time for his big legislative priority. Biden wants a bigger bill, more like what he proposed in his trimmed-down $1.7 billion American Jobs Plan. (CNBC & AP)

A bill to establish a federal holiday on Juneteenth, marking the end of slavery in the U.S., passed the House on Wednesday, paving the way for Biden to sign it into law. The measure, which passed in the Senate by unanimous consent less than a day earlier, cleared the House in a 415-14 vote. All the no votes came from GOP members. (CNBC)

CureVac shares plunged nearly 50% in Thursday's U.S. premarket, the morning after the German biopharma firm released disappointing preliminary results for its Covid vaccine candidate. It demonstrated an interim efficacy of 47% against the disease "of any severity," missing the main goal and throwing in doubt the potential delivery of hundreds of millions of doses to the European Union. (CNBC & Reuters)

China's market regulator has begun an antitrust probe into Didi Chuxing, according to Reuters, just as the ride-hailing giant pushes ahead with what could be the largest initial public offering in the U.S. this year. It's the latest in a sweeping crackdown on Chinese tech giants, including Alibaba (BABA) and Tencent.

Microsoft (MSFT) has named CEO Satya Nadella to the additional role of chairman of the board, replacing independent director John Thompson, following a unanimous vote. The change reflects the success Nadella has had in the past seven years making Microsoft more prominent in technology and business altogether. (CNBC)

The Honest Company (HNST) reported a wider-than-expected loss in its first quarter as a public company, although revenue was better than analysts had anticipated. Sales got a boost from pandemic-induced demand for sanitizing products. The stock tumbled 8.3% in premarket trading.

Tenet Healthcare (THC) shares jumped 3.5% in the premarket, after it announced the sale of five hospitals and associated physician practices in Florida to Steward Health Care for about $1.1 billion.

Lennar (LEN) earned $2.65 per share for its latest quarter, beating the $2.36 a share consensus estimate. Revenue topped forecasts as well. The home builder is dealing with higher input costs and a labor shortage, but the lack of homes for sale in the U.S. helped push prices higher and expand Lennar's profit margins significantly over a year earlier. Shares rose 1% in the premarket.

Dell Technologies (DELL) was chosen by Dish Network (DISH) to build key parts of the 5G network the satellite TV operator is building in the U.S. Dish will launch 5G service in Las Vegas later this year and plans to cover 70% of the U.S. with its network by mid-2023. The stocks were little changed in Thursday's premarket.

The Justice Department sued to block insurance company Aon's (AON) deal to buy consulting firm Willis Towers Watson (WLTW) for $35 billion. The DOJ said the combination could eliminate competition in several different markets. The firms said the move showed a lack of understanding of their businesses, clients and the markets in which they operate.

A variety of financial institutions, governments and airlines experienced brief website outages early Thursday. Some of the outages were linked to a failure at web services company Akamai Technologies (AKAM), according to media reports. Akamai said it was aware of the issue and was working to restore service as soon as possible. Shares fell 1.5% in premarket trading.

As the U.S. Open golf tournament tees off at Torrey Pines in California on Thursday, local hero Phil Mickelson, 51, following a PGA Championship win just last month, is seeking the one major title that would complete his career Grand Slam. Mickelson has won the PGA twice, The Masters three times, and the British Open once. (AP)

17/06/2021 Markets Comments Off on What to watch today: Stocks set to slip after Wall Street's Fed-driven decline
Markets