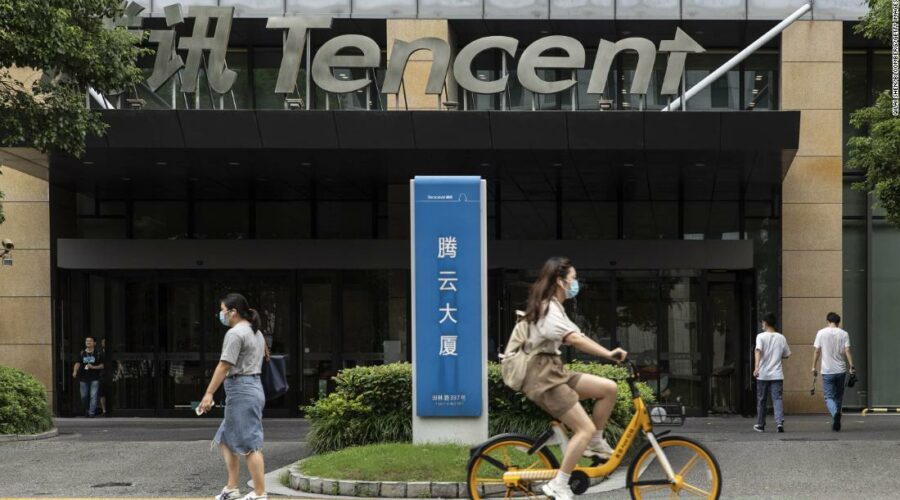 New Delhi (CNN Business)Tencent reported a 29% rise in second-quarter profit, even as Beijing expands its scrutiny of the private sector.

The Chinese gaming and social media giant said Wednesday that revenue jumped 20% to 138.3 billion yuan ($21.3 billion) for the three months ended June, compared to the same period last year, while profit rose to 42.6 billion yuan ($6.6 billion).
Tencent (TCEHY) reported results as the company and other Chinese tech firms are being rattled by Beijing’s historic crackdown on the sector.

Tencent alone has lost more than $400 billion in market value after regulators bombarded the sector with penalties, new rules and orders to overhaul parts of their business.

The internet giant has so far escaped the harshest scrutiny faced by peers like Alibaba (BABA), which this spring was slapped with a record $2.8 billion fine after regulators concluded that it had behaved like a monopoly.

But Tencent has still faced challenges. Last month, its market value plummeted after it was ordered to scrap its plan to acquire a music streaming player, China Music Corporation. Regulators cited competition concerns, noting that the Shenzhen-based tech giant has long been a market leader.
Tencent also briefly suspended new user registration for its popular messaging app WeChat in July in order to upgrade its security technology “according to relevant laws and regulations” — a decision that came in the middle of other regulatory scrutiny.
And the company announced new limits on the amount of time minors can spend playing the company’s online games earlier this month.

That statement came after a business newspaper owned by Xinhua News Agency — China’s official news outlet — published a lengthy analysis that used terms such as “opium” and “electronic drug” to describe the harmful effects of gaming on children. The article mentioned Tencent’s popular video game “Honor of Kings” as one of the games to which young people are addicted.
Tencent’s sell-off even continued earlier this week, when it and other tech giants lost more than $50 billion in market value collectively after the government proposed sweeping new rules to further curb anti-competitive behavior among big internet firms.
Source: Read Full Article

18/08/2021 Markets Comments Off on What does the future hold for Chinese companies listed in the US?
Markets