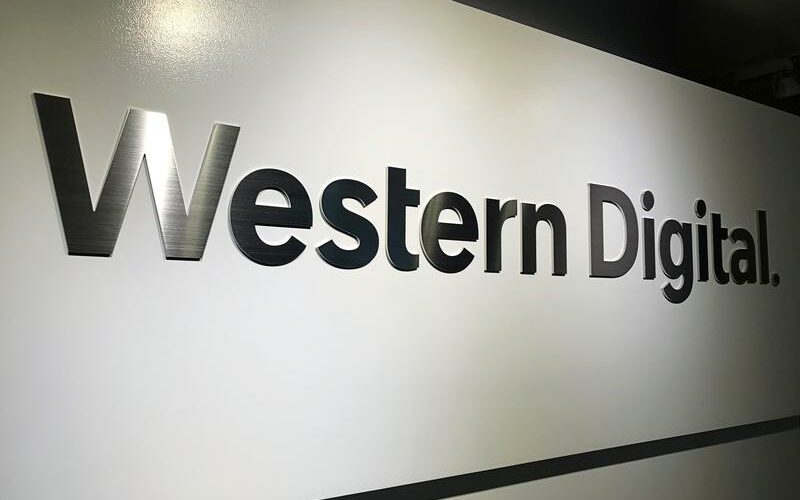 The logo of Western Digital Corporation is displayed at the company’s headquarters in Tokyo, Japan, May 27, 2019. REUTERS/Yoshiyasu Shida

The companies could reach an agreement as early as mid-September, and Western Digital Chief Executive Officer David Goeckeler would run the combined firm, the source said, who requested anonymity to discuss confidential matters.

The Wall Street Journal reported the talks earlier on Wednesday. The news sent San Jose, California-based Western Digital’s shares up as much as 15% on Wednesday and they closed up 7.8%.

A potential combination of the two – the second- and third-largest NAND flash memory chipmakers – would have market share equal to leader Samsung Electronics Co Ltd, according to market research firm TrendForce.

Kioxia, sold by Toshiba Corp in 2018 to private equity firms as Toshiba Memory Corp, shelved plans last year for what would have been Japan’s largest initial public offering in 2020. In June, however, financial magazine Diamond said Kioxia was planning an IPO as early as September.

An IPO is still a possibility should Kioxia fail to reach a deal with Western Digital, the source said.

Toshiba still owns about 40.6% of Kioxia, according to its 2020 annual report. Toshiba’s shares were flat on Thursday in early trade.

Kioxia told Reuters it does not comment on market rumours or speculation. It said it was considering appropriate timing for an IPO.

Western Digital did not immediately respond to requests for comment.

While Samsung dominates with over a third of the NAND market, TrendForce said, Kioxia has a nearly 19% share and Western Digital 15%. South Korea’s SK Hynix Inc and U.S. players Micron Technology Inc and Intel Corp are the other large players.

A Western Digital-Kioxia merger would further consolidate the industry after Hynix agreed to buy Intel’s NAND business for $9 billion last year, a deal that is awaiting anti-trust clearance.

The global chip industry has been rationalising due to the pressures of shortages and trade disputes between Washington and Beijing, triggering supply chain woes for makers of cars and laptops to home appliances and smartphones.