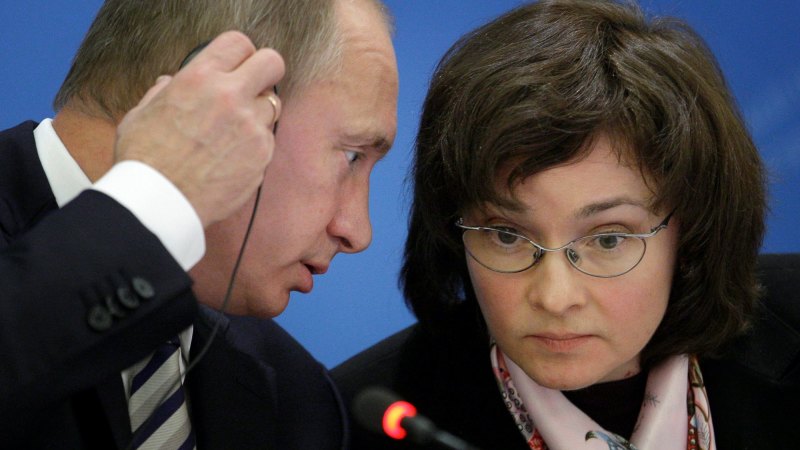 Elvira Nabiullina, Russia’s central bank governor, is known for sending coded messages with her clothes and brooches, such as a hawk to signify interest rate hikes or a rain cloud to suggest a gloomier outlook.

When Vladimir Putin assembled his top economic team following the invasion of Ukraine, she wore all black. Some suggest it was to signal the death of the Russian economy. 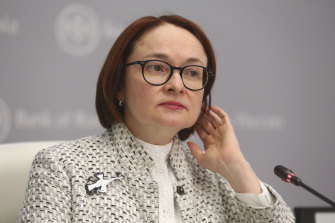 Russia’s central bank governor Elvira Nabiullina signalled her discomfort to the invasion from the get-go and reportedly offered her resignation following the invasion.Credit:Bloomberg photo by Andrey Rudakov

Since taking the role in 2013, the revered technocrat has steered Moscow’s economy through a number of crises with her ultra-conservative monetary policy.

Now, after Putin last week nominated her for a fresh five-year term, the 58-year-old has unexpectedly found herself on the front line in Russia’s “economic war” against the West.

International investors wondering how Nabiullina is stomaching the country’s economic turmoil may find an answer in the apparent divide developing between her and Putin.

Nabiullina signalled her discomfort to the invasion from the get-go and reportedly offered her resignation following the invasion.

The President refused, however, thrusting her back into battle as Russia’s economy buckles under the weight of Western sanctions.

Leaving now would have been seen as a betrayal by Putin after years of close cooperation between the two, Bloomberg reported.

Despite that, Nabiullina reportedly failed to stress test the economic blow of war, having been blindsided by the decision to push ahead with the invasion.

Some have little sympathy for the trapped governor, arguing Putin has long been putting in place the pieces for a war, while others doubt the leaked resignation story.

Few women make it into Putin’s inner circle, while even fewer officials in the Kremlin manage to gain the respect of international investors. But Nabiullina had blazed a trail with her stewardship of the Russian economy.

Tim Ash, an emerging market strategist at BlueBay Asset Management, says: “The nature of the Putin regime was clear a year ago, five years ago, 10 years ago… we’ve had the Donbas, Crimea, [Sergei] Skripal, [Alexei] Navalny. They’ve had plenty of time to resign and they haven’t.

Nabiullina’s reputation is in “tatters” after helping the Kremlin since the invasion, he adds.

Few women make it into Putin’s inner circle, while even fewer officials in the Kremlin manage to gain the respect of international investors. But Nabiullina had blazed a trail with her stewardship of the Russian economy.

Liam Peach, an emerging market economist at Capital Economics, says: “She established a really strong reputation in Russia as an inflation hawk and a credible central bank governor. 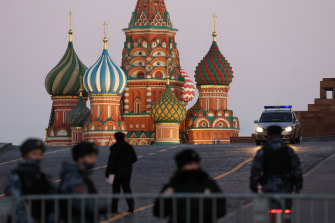 The Russian economy has been battered by Western sanctions in response to the invasion of Ukraine..Credit:Bloomberg

“After the 2014-15 rouble crisis, she floated the rouble and she’s been at the forefront of the central bank’s efforts in recent years to clean up the banking system.”

The ex-Sberbank chief executive has managed to steer the Russian economy through crises including COVID-19, an oil price crash and previous waves of sanctions. But the war has undone much of her hard work to strengthen the country’s economy with the central bank itself hit by sanctions.

Now, amid the war, Nabiullina has been forced to double interest rates to 20 per cent, freeze trading on Moscow’s stock exchange and introduce capital controls – a move she was said to have privately claimed was a resigning red line.

Peach says Nabiullina has been “very successful at preventing a liquidity and solvency crisis in the banking sector” and stopping foreign money leaving. Perhaps her place at the heart of Moscow’s economic war should be no surprise.

A central bank under Nabiullina was key in Putin’s Fortress Russia plan to cushion the blow of any future wave of Western sanctions. Since the annexation of Crimea, she built up a $US630 billion ($839 billion)) foreign reserves war chest to fight any slump in the Russian rouble, ammunition blunted by sanctions on the central bank.

Nabiullina has also stood by Putin through his increasing authoritarianism. She was an advisor to the president before her current role, and also served as his minister of economic development.

Reluctant or not, Nabiullina is on the front line – but it’s a role she’s fought for years.

25/03/2022 Markets Comments Off on Vladimir vs Elvira: The battle on Russia’s financial front line
Markets