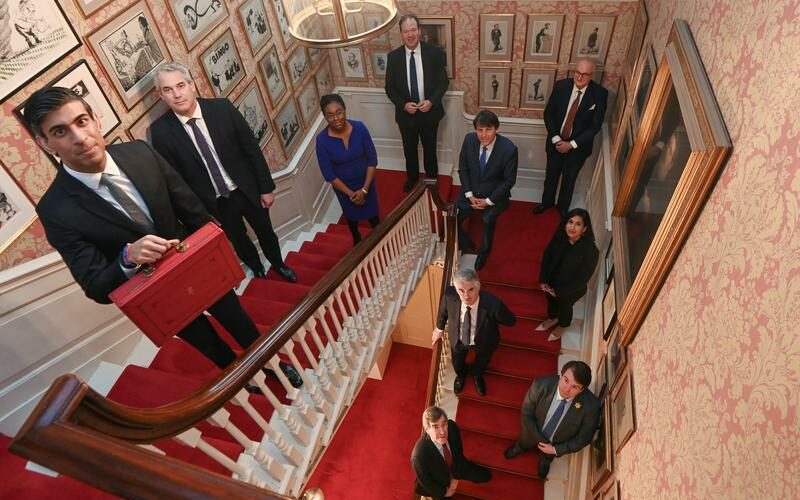 LONDON (Reuters) – Finance minister Rishi Sunak announced a costly extension of his emergency aid programmes to see Britain’s economy through its current coronavirus lockdown, but announced a tax hike for many businesses as he began to focus on fixing the public finances.

Delivering an annual budget speech on Wednesday, Sunak said the economy will regain its pre-pandemic size in the middle of 2022, six months earlier than previously forecast, helped by Europe’s fastest COVID-19 vaccination programme.

But it will remain 3% smaller in five years’ time than it would have been without the damage wrought by the coronavirus crisis and extra support is needed now as the country remains under coronavirus restrictions, he said.

Among the new support measures was a five-month extension of his huge jobs rescue plan and more help for the self-employed, the continuation of an emergency increase in welfare payments, and an extension of a VAT cut for the hospitality sector.

A tax cut for home-buyers was also extended until the end of June.

“First, we will continue doing whatever it takes to support the British people and businesses through this moment of crisis,” Sunak told parliament.

“Second, once we are on the way to recovery, we will need to begin fixing the public finances – and I want to be honest today about our plans to do that. And, third, in today’s Budget we begin the work of building our future economy.”

Announcing forecasts by the Office for Budgetary Responsibility (OBR), Sunak said the economy was likely to grow by 4% in 2021, slower than a forecast of 5.5% made in November, reflecting the current lockdown which began in January.

Sunak promised to do “whatever it takes” to steer the economy through what he hopes will be the final months of pandemic restrictions.

He has already racked up Britain’s highest borrowing since World War Two, which hit an estimated 17% of GDP in the 2020/21 financial year that is about to end and should fall to a still historically high 10.3% in 2021/22.

In a first move to raise taxes, Sunak announced he would raise corporation tax to 25% from 19% from 2023, by which time the economy should be past the pandemic crisis.

“Even after this change the UK will still have the lowest corporation tax rate in the G7 – lower than the United States, Canada, Italy, Japan, Germany and France,” he said.

Businesses with profits of 50,000 pounds or less would pay a new Small Profits Rate, maintained at the current rate of 19%.

Sunak also said he would freeze the amount of money that people can earn tax-free and the threshold for the higher rate of income tax until 2026.