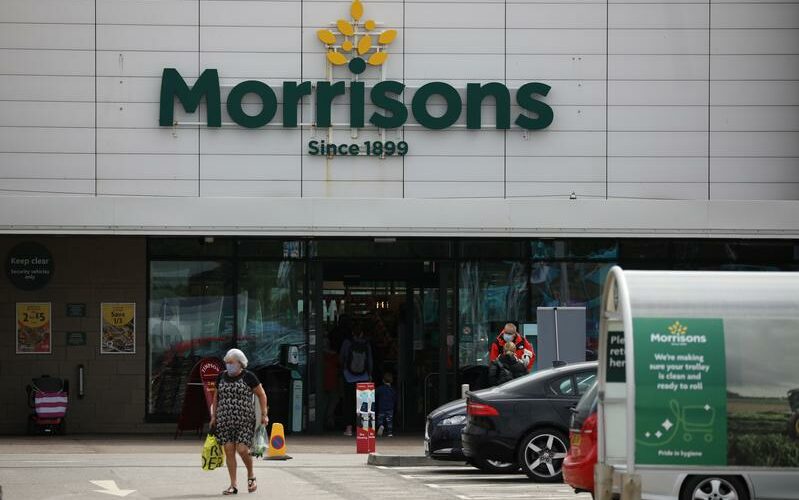 LONDON (Reuters) -British supermarket group Morrisons has agreed to an improved takeover offer worth 6.7 billion pounds ($9.3 billion) in cash from a consortium led by Fortress Investment Group, though its shares were trading above the level of the new bid.

Softbank-owned Fortress said its raised offer comprises 270 pence per Morrisons share plus a 2 pence a share special dividend and was aimed at warding off its rival suitor.

Fortress “remains committed to becoming the new owner of Morrisons and to being a responsible long-term steward of this great British company through the next stage of its evolution,” it said.

Morrisons said its board had re-confirmed its unanimous recommendation of the offer. It had previously agreed a Fortress offer worth 254 pence a share or a total of 6.3 billion pounds on July 3.

However, major Morrisons investors Silchester, M&G and JO Hambro all indicated that offer was too low.

None of those investors had any immediate comment on Fortress’ new offer.

CD&R had a 230 pence a share proposal worth 5.52 billion pounds rejected by Morrisons on June 17.

Britain’s Takeover Panel, which regulates corporate takeovers, has set an Aug. 9 deadline for CD&R to respond, though that deadline could be extended if all parties agree.

Fortress’ increased offer represents a premium of 52% to Morrisons’ closing share price of 178 pence on June 18 – the day before CD&R went public with its proposal.

Shareholders in Morrisons are due to vote on the Fortress offer on Aug. 16.

To pass, the offer needs the support of shareholders representing at least 75% in value of voting investors at the meeting.

Analysts have speculated that Amazon, which has a partnership deal with Morrisons, could still enter the fray.

Morrisons has described the consortium as suitable owners for a business with more than 110,000 staff and a deeply integrated supply chain, that includes its own meat and fish processing sites.

Morrisons is unique among British supermarkets in making half of the fresh food it sells.