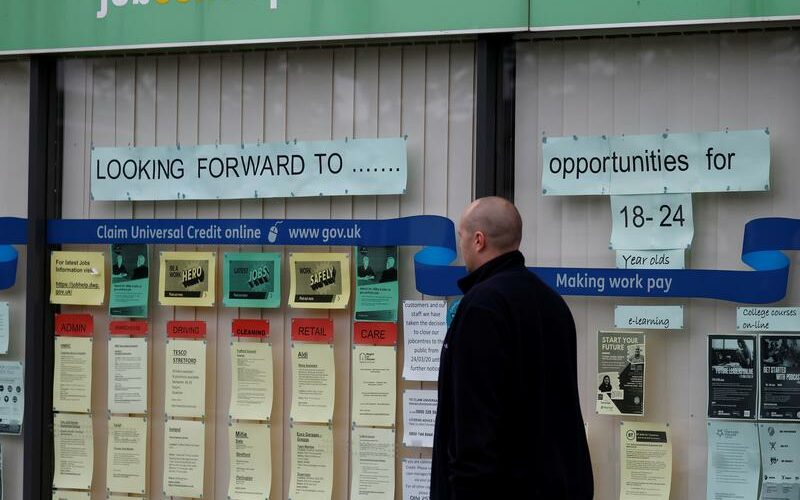 LONDON (Reuters) – British employers plan to increase staff numbers by the most in more than eight years over the coming months and few intend to make staff redundant when government furlough support ends next month, a survey showed on Monday.

FILE PHOTO: A man walks past a job centre following the outbreak of the coronavirus disease (COVID-19), in Manchester, Britain, July 8, 2020. REUTERS/Phil Noble

The quarterly survey by Britain’s Chartered Institute of Personnel and Development (CIPD www.cipd.co.uk) added to signs of labour market shortages as the economy emerges from the coronavirus pandemic, though it offered less evidence of wage or inflation pressures

The CIPD said the net employment intentions balance – the difference in percentage points between employers who are hiring and those cutting staff – rose to +32 from +27 three months earlier, its highest since the survey began in early 2013.

Only 13% of employers plan to make staff redundant, down from 33% a year ago when there were much greater fears that a premature end to government furlough support would create a spike in unemployment.

Earlier this month the Bank of England forecast that the unemployment rate would not rise beyond its current 4.8%, much lower than the peak of around 7.5% it saw earlier.

The CIPD survey also showed staff shortages, especially in the hospitality sector where many employers shed staff during the pandemic due to lengthy closures of hotels, pubs, restaurants and other venues.

But there was less sign that this was leading to big rises in wages, in contrast to some other surveys of recruiters and employers. The BoE has said it is keeping a close eye on wage pressures because of the potential longer-term inflation impact.

The CIPD survey showed that employers offered an average annual pay rise of 2% to staff this summer, unchanged from the spring and in line with pre-pandemic norms.

Raising pay was not generally seen as the solution to staff shortages either. Only 23% of employers with hard-to-fill vacancies said they would raise wages, compared with 44% who aimed to train existing staff to fill these roles.

The CIPD survey was based on online polling of 2,042 employers conducted by YouGov between June 16 and July 12.

16/08/2021 Markets Comments Off on UK employers have strongest hiring plans in over 8 years, survey shows
Markets