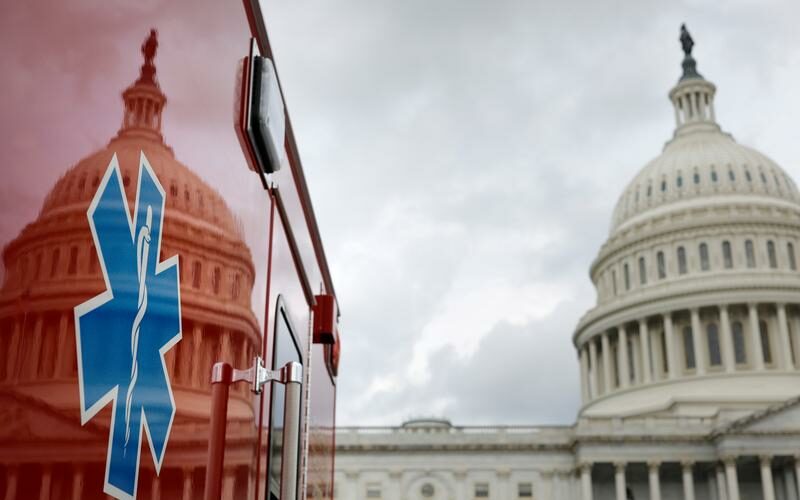 WASHINGTON (Reuters) – Negotiations over President Joe Biden’s $1.9 trillion COVID-19 relief bill go into overdrive this week as the U.S. Senate begins debate over the sweeping legislation and lawmakers jockey to include pet projects such as broadband connectivity.

FILE PHOTO: The U.S. Capitol Building is reflected against an ambulance along the East Front on Capitol Hill in Washington, U.S., July 16, 2020. REUTERS/Tom Brenner/

Senator Angus King, an independent who aligns with Democrats, has been pushing for billions of dollars to expand high-speed broadband service in rural areas — an idea that could attract Republican support.

The Senate was due to take up as early as Wednesday the measure passed last weekend by the House of Representatives.

Democratic senators were privately discussing among themselves and with Biden ways to reallocate at least some of the huge pot of money.

The version of the bill passed by the House would pay for vaccines and medical supplies and send a new round of emergency financial aid to households, small businesses and state and local governments. It includes $1,400 direct payments to individuals, a $400-per-week federal unemployment benefit through Aug. 29, and help for those having difficulty paying rents and home mortgages during the pandemic.

The Senate version is likely to include at least one major change: Eliminating a minimum wage increase to $15 per hour over five years from its current $7.25. Late last week the effort was blocked under special rules designed to ease passage of this legislation in the Senate.

Democrats are expected to resuscitate their minimum wage initiative sometime after the COVID-19 bill is enacted.

Congress is trying to give final approval to Biden’s top legislative priority as the pandemic already has taken the lives of 514,000 Americans.

“Millions of jobs and trillions of dollars have been taken out of our economy,” Senate Majority Leader Chuck Schumer said on the Senate floor on Tuesday. He said the bill “is designed to finish the job, to patch up the holes in our economy and lay a foundation for our recovery.”

Schumer will need the support of all 48 Democrats and the two independents who caucus with them, as well as Vice President Kamala Harris’ tie-breaking vote to pass the measure before some jobless benefits expire on March 14.

They want the money to come out of the $350 billion for state and local aid included in the bill.

Their argument is that those with poor or no broadband access are stymied in accessing medical services, including registering for vaccines, and getting their children plugged in to remote learning during the pandemic.

A Senate aide familiar with negotiations said there also were discussions of tightening income qualifications for people receiving the $1,400 direct payments.

Moderate Democratic Senator Joe Manchin said he wants the House’s $400-per-week temporary federal unemployment benefit reduced to $300. The Senate aide said there also were moves to “turn the spigot off” on the payments as state jobless rates sink below a certain threshold.

Democratic Senator Jon Tester, following a conversation he and other senators had with Biden on Monday, told reporters: “We talked about the package and we talked about some, how would you put it, targeting, targeting dollars.”

Once the Senate finishes the bill, possibly by the end of this week, the House would then have to sign off one last time before sending it to Biden for enacting into law. House Majority Leader Steny Hoyer said that final vote would come next week.