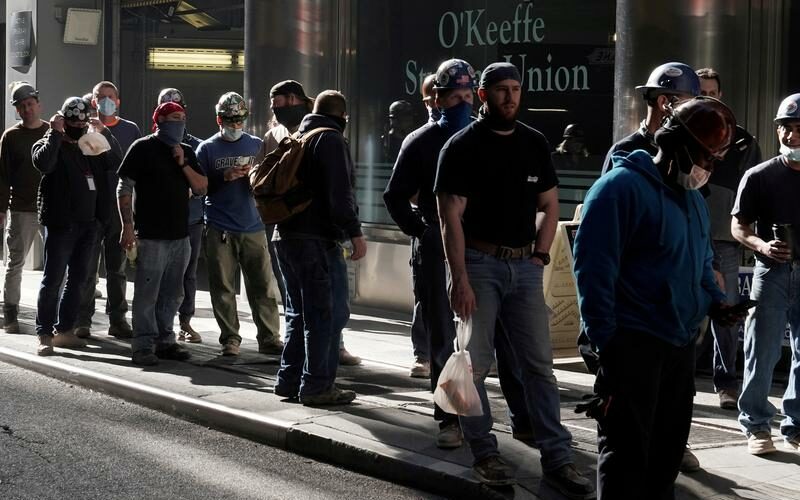 WASHINGTON (Reuters) – The U.S. economy created more jobs than expected in February as falling new COVID-19 infections and additional pandemic relief money from the government boosted hiring at restaurants and other services businesses, firmly putting the labor market recovery back on track.

Though job growth momentum is expected to build in the months ahead amid an acceleration in the pace of vaccinations and more fiscal stimulus, it will probably take several years for the labor market to heal from the deep scars inflicted by the coronavirus pandemic, which is now in its second year.

The Labor Department’s closely watched employment report on Friday showed at least 4.1 million Americans have been out of work for more than six months, accounting for 41.5% of the unemployed population in February. Another 3.5 million have permanently lost their jobs.

“There remains easy fuel for strong payroll gains in coming months as the reopening gains momentum,” said Robert Rosener, an economist at Morgan Stanley in New York. “But there is much further to go before conditions are consistent with maximum employment.”

Nonfarm payrolls surged by 379,000 jobs last month after rising 166,000 in January. Payrolls fell in December for the first time in eight months. The economy has recouped 12.7 million of the 22.2 million jobs lost in the pandemic recession.

Economists polled by Reuters had forecast February payrolls increasing by 182,000 jobs. Restaurants and bars hired 286,000 workers, accounting for 75% of the payrolls gain. There were also increases in employment at hotels and motels and at amusements, gambling and recreation establishments.

Altogether, leisure and hospitality employment jumped by 355,000 jobs, making up 94% of all jobs created last month.

Temporary help, a harbinger for future hiring, increased further. Healthcare and social assistance also added jobs, and retailers hired 41,000 workers. Manufacturing payrolls increased by 21,000 jobs. About half of the factory job gains were in transportation equipment, despite a global semiconductor chip shortage, which has forced some automakers to cut production.

But construction employment decreased by 61,000 jobs because of bitter cold across the country. Government payrolls dropped by 86,000 jobs, with losses concentrated at state and local governments. The diffusion index, or measure of private industries expanding, jumped to 57.0 from 48.4 in January.

The surge in hiring follows on the heels of a strong rebound in consumer spending in January, which prompted economists to sharply upgrade their growth estimates for the first quarter.

A decrease in daily coronavirus cases and hospitalizations, and nearly $900 billion in stimulus provided by the government at the end of December are driving the revival in activity.

That has raised concerns that President Joe Biden’s $1.9 trillion recovery plan under consideration by Congress, combined with the Federal Reserve’s near zero interest rates and bond purchases, could cause the economy to overheat.

U.S. Treasury yields have spiked as investors anticipate higher inflation. Biden is not backing down.

“Without a rescue plan, these gains are going to slow,” Biden said at a White House economic briefing. “We can’t afford one step forward, two steps backward. People need the help now.”

Fed Chair Jerome Powell on Thursday again brushed aside the inflation concerns, saying he expected the U.S. central bank “will be patient” until the economy is “very far along the road to recovery.”

Stocks on Wall Street rallied, while the dollar rose against a basket of currencies. U.S. Treasury prices were higher.

Even as the labor market recovery is regaining steam, ample slack remains. Though the unemployment rate fell to 6.2% last month from 6.3% in January, it continued to be understated by people misclassifying themselves as being “employed but absent from work.” Without this problem, the unemployment rate would have been 6.7%. It is about 9.5%, including people who have given up the search for work.

While the share of long-term unemployed is below its peak near 45% during the Great Recession, it is far higher than in previous downturns where it rose not much above 20%.

“This indicates that unemployment is highly concentrated among people who lost their jobs near the start of the recession, rather than workers going through relatively short spells of unemployment,” said Dean Baker, economist at the Center for Economic and Policy Research in Washington.

Unemployment remains high among Blacks and Hispanics, as well as Americans without a high school diploma and college degrees.

According to Census Bureau data, around 10 million mothers living with their own school-age children were not actively working in January, 1.4 million more than during the same month in 2020.

“There is still more slack in the labor market than the unemployment rate advertises,” said Scott Anderson, chief economist at Bank of the West in San Francisco. “It is difficult, if not impossible, to generate sustained inflation and higher inflation expectations when the economy is still so far away from full employment.”