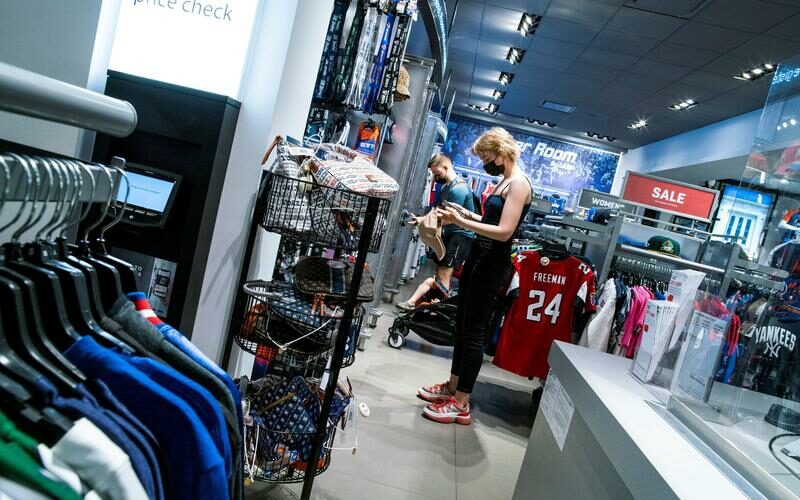 WASHINGTON (Reuters) – U.S. consumer confidence hovered at a 14-month high in May as optimism over jobs tempered concerns about rising inflation and diminishing government financial support.

Though the survey from the Conference Board on Tuesday suggested the pace of economic growth remained robust in the second quarter, the recovery from the COVID-19 pandemic recession, which started in February 2020, is bumpy.

The housing market, one of the star performers, is showing signs of fatigue, with new single-family homes sales dropping in April amid a dearth of properties, which is boosting prices at the fastest pace in more than 15 years.

“Economic activity is getting back to where it was before the pandemic hit,” said Joel Naroff, chief economist at Naroff Economics in Holland, Pennsylvania. “So why aren’t people more exuberant? We might want to start blaming inflation.”

The Conference Board said its consumer confidence index slipped to a reading of 117.2 this month from 117.5 in April, the highest level since February 2020. Economists polled by Reuters had forecast the index at 119.2.

Effective May, the Conference Board switched to an online from a mail survey. Data from January through April was revised to reflect the results of the online survey. The dip mirrored other sentiment surveys, which were pulled down by worries that rising inflation would erode consumers’ purchasing power.

Inflation is bubbling as the economy’s reopening after coronavirus-related restrictions and massive fiscal stimulus unleash pent-up demand, which is pushing against supply constraints, leading to price hikes for most goods.

The survey’s present situation measure, based on consumers’ assessment of current business and labor market conditions, increased to a 14-month high of 144.3 from 131.9 last month.

But the expectations index, based on consumers’ short-term outlook for income, business and labor market conditions, fell to 99.1 from 107.9 in April. Consumers’ inflation expectations over the next 12 months jumped to 6.5% from 6.2% last month.

Stocks on Wall Street were mixed. The dollar was steady versus a basket of currencies. U.S. Treasury prices rose.

The Conference Board survey’s so-called labor market differential, derived from data on respondents’ views on whether jobs are plentiful or hard to get, raced to a reading of 34.6 in May from 21.6 in April.

This measure, which closely correlates to the unemployment rate in the Labor Department’s closely watched employment report, is just below its 38.3 peak in August 2019. The jump in the so-called labor market differential this month likely reflected a record 8.1 million job openings.

It offers hope that job growth picked up this month. A labor shortage is hampering job growth, even as nearly 10 million Americans are officially unemployed. The worker shortage has been blamed on generous unemployment benefits, including a weekly $300 subsidy from the government.

Lack of child care facilities, with most schools offering partial in-person learning, as well as lingering fears of the virus and pandemic-related retirements are also believed to be contributing to the worker shortage, which curbed hiring in April. The government-funded benefits, part of the $1.9 trillion pandemic relief package, expire in early September and school districts are expected to resume in-person classes in the fall, which economists hope will boost the labor pool.

Fewer consumers planned to buy homes, cars and major household appliances over the next six months, relative to April. However, the link between these purchasing plans and consumer spending is weak.

The market for new homes is being boosted by near record low inventory of previously owned houses, especially entry level homes. The pandemic has fueled demand for spacious and more expensive accommodations as millions of Americans work from home and take classes remotely.

But the virus has disrupted labor supply at saw mills and ports, causing shortages of lumber and other raw materials, limiting builders’ ability to ramp up construction of new homes to plug the inventory gap.

Demographics favor the housing market. People between the ages of 26 and 34 years account for about 12.5% of the U.S. population.

“A growing number of millennials are aging into their prime household formation years, which will remain a fundamental tailwind over the next few years,” said Bernard Yaros, an economist at Moody’s Analytics in West Chester, Pennsylvania.

A third report showed the S&P CoreLogic Case-Shiller house price index rose 13.2% in March from a year ago, the largest increase since December 2005, after rising 12.0% in February.

Boiling house price inflation was underscored by a fourth report showing the Federal Housing Finance Agency house price index jumped a record 13.9% on a year-on-year basis in March after advancing 12.4% in February.

The White House said on Tuesday it was monitoring the soaring house prices, saying they raised concerns about “affordability and access to the housing market.”

Economists and Federal Reserve officials do not believe another housing bubble is developing, noting that the surge is being mostly driven by a mismatch between supply and demand, rather than poor lending practices, which triggered the 2008 global financial crisis.

Richmond Fed President Thomas Barkin said on Tuesday he didn’t see the leverage in the housing market “going to excess levels yet.”