Pengana chief executive Russel Pillemer told Malcolm Turnbull that the former prime minister’s son, Alex Turnbull, had threatened to “come after” him, in a desperate plea to halt a lawsuit that has exposed the political family to allegations of lies and hiding private investments from the public.

Mr Pillemer sent a five-page letter to Mr Turnbull in November last year where he outlined his “personal feelings” for the former prime minister, describing him as his “hero” and said “I just cannot understand how this has happened”.

Mr Turnbull told the NSW Supreme Court this week he found the letter shocking and threatening. However, Mr Pillemer claimed he was threatened by Alex Turnbull who “specifically stated to me words to the effect that I am up against your family – who will ‘come after me’.” 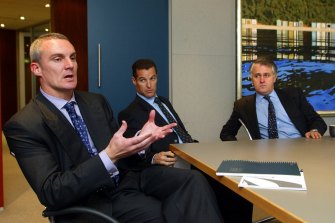 Mr Pillemer added he was considering bringing in an “outside party” to held fund the litigation, in which case he would “lose complete control over how the litigation is handled – with my backers involved in ‘calling the shots’.”

“I clearly don’t have your family’s expertise or deep pockets to engage in such expensive litigation – and I don’t have the resources/contacts to fight what will surely be a major publicity campaign.”

Alex Turnbull is suing Mr Pillemer for up to $12 million in damages, claiming crucial information was withheld about a merger that caused the Turnbulls to accept $6 million in cash rather than shares in the merged entity, that later soared.

Mr Pillemer said the lawsuit was “so ludicrous”, given it would destroy the longstanding personal and professional relationship between the families.

“The notion that you would think that I would ‘cheat’ you and/or your family is beyond comprehension,” he said. “For two decades I have been your greatest supporter – and you know I would do anything for you. Likewise, you did so much for me and my family – and we were always so appreciative of this. You were a hero to me and my whole family – and indeed we think of you as our extended family.

My Dad told people that the 5 best days of his life were his marriage, the birth of his 3 sons – and the day that Malcolm was made PM. He compiled several large scrapbooks of all major press articles written about on you (which I will send to you).“

“Surely you know me far too well to think that I would be willing to throw away my relationship with you (my great friend and no less the PM of Australia!) just to get a financial benefit?”

Mr Pillemer also said he thought Alex Turnbull was trying to bully him into settling outside the courts, in the anticipation Mr Pillemer would seek to protect the family’s reputation and longstanding relationship. “Well I have decided that this is not fair – I cannot be expected to give him money just because I am concerned about you being targeted.”

The letter also describes a “massive lunch” Mr Turnbull held for former Israel Prime Minister Benjamin Netanyahu where Mr Pillemer and his wife felt honoured to be seated at the “best table in the room – right next to the main table”.

“When you saw Carole and I, you immediately called us over and introduced us to Bibi as your great friends and partner – and then we stood around with you and Bibi for a while and spoke. I cannot explain to you how much that meant to both Carole and me.

“We were on the biggest highs of our lives after that lunch, marvelling at what a great man and friend you were to us – that in a huge audience of some of the most important people in Australia, it was the two of us that you paid the most attention to.

“How could you possibly think that the very next day following the lunch, I would set out to deceive your family – knowing that I would be ‘found out’ only a very short time later. Surely, you can see that it all makes no sense?”

In the letter, Mr Pillemer references a text message he sent to Alex Turnbull informing him of the benefits of Pengana’s potential merger with Hunter Hall and pleaded with Mr Turnbull to intervene and stop his son’s case, claiming it was already causing reputational damage for all parties involved.

“The most truly bizarre element of this action is that if it does go to court, it’s your family that would be the most impacted – with your detractors no doubt using it to try and inflict damage on you. I assure you, that this is the very last thing that I want.”

Mr Pillemer said he did not think the lawsuit has “any chance of success” but was instead “extremely damaging” and placing “me and my family under existential risk – due to the costs involved, the magnitude of the claim and the potential reputational damage”.

“I obviously feel very exposed in going into this battle – against someone who has such huge resources.

“I know that you always hated injustice – and this is a huge injustice. All I ever did was to act with your protection and best interests in mind – and now I find myself in this position,” he said. “I am begging you to not let all this happen. Please help!”

The lawsuit over alleged misleading and deceptive conduct has opened a wider debate over whether Mr Turnbull properly disclosed his ongoing exposure to Pengana since co-founding the Sydney-based funds management firm with Mr Pillemer in 2003.

Mr Turnbull told the court this week he valued “transparency and disclosure” and had erased the $6 million loan to Mr Pillemer for shares in Pengana in 2015, when he “gifted” the stake to his children. Mr Turnbull claimed he wanted to reduce perceived conflicts of interest, as Pengana has stakes in major ASX-listed companies that lobby government, and his son was better placed to control the asset.

Alex Turnbull had told the court he had initially sought to minimise public disclosure over his family’s ongoing involvement with Pengana due to the potential for negative publicity, but later stated he would not have cared given the money he could have made from Pengana’s ASX listing.

30/09/2021 Markets Comments Off on Turnbulls threatened to ‘come after me’, says Pengana CEO
Markets