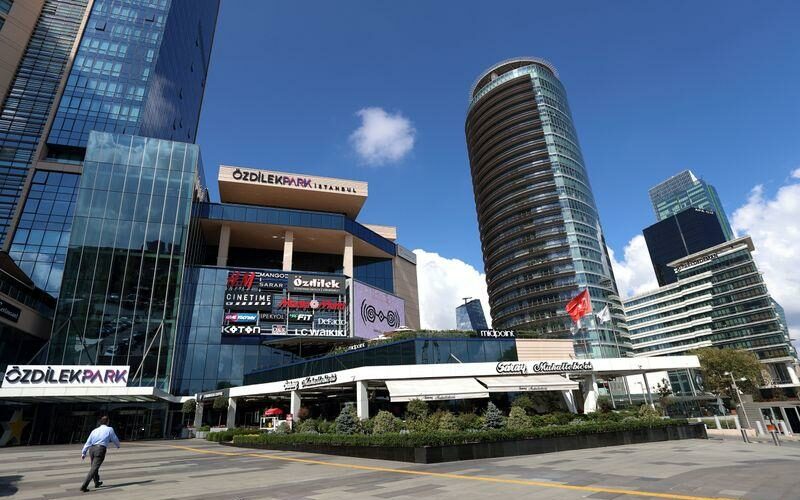 ISTANBUL (Reuters) – Turkey’s economy grew 5.9% in the fourth quarter tmsnrt.rs/3dVombP and 1.8% in 2020 as a whole, annual data showed on Monday, emerging as one of only a few globally to avoid a contraction due to the coronavirus pandemic.

FILE PHOTO: FILE PHOTO: A man walks towards the entrance of OzdilekPark Shopping Center in the business and financial district of Levent, in Istanbul, Turkey September 8, 2020. REUTERS/Murad Sezer

Propelled by a burst of credit in mid-2020, fourth-quarter GDP grew 1.7% from the previous quarter on a seasonally and calendar-adjusted basis, the Turkish Statistical Institute said.

A surge in gross domestic product (GDP) growth in the second half of the year that surpassed Turkey’s potential rate was driven by a near doubling of lending by state banks to face down the initial wave of the virus.

While outperforming all emerging market (EM) and G20 peers except China, Turkey’s growth came at a price: The cheap lending accelerated a record drop in the lira, drew down the country’s foreign currency reserves and helped push inflation to 15%. Also, few jobs were created.

Graphic: Turkey grew in 2020 despite pandemic –

The recovery was “unbalanced and ultimately exacerbated some of the country’s external vulnerabilities,” said Jason Tuvey, senior EM economist at Capital Economics.

Financial sector activity surged more than 21% last year, driving overall growth, the data showed. Tourism and other services activity dropped by 4.3% and the construction sector, an engine of growth in years past, shrank 3.5%.

The lira firmed to 7.351 against the dollar after the GDP data and was 1% stronger on the day.

Finance Minister Lutfi Elvan, appointed in November, said on Twitter Monday that Turkey would prioritise price stability this year. Analysts say the economy should expand by roughly 5% in 2021 despite tight monetary policy.

In a Reuters poll, GDP was forecast to have expanded 7.1% year-on-year in the fourth quarter of 2020, despite new curfews and curbs on the service sector to address a second COVID-19 wave, and 2.3% for the whole year.

World economies mostly contracted and tumbled into recessions last year, with emerging and developing nations shrinking by some 2.4% according to the International Monetary Fund.

The major EM economy has cooled in recent years tmsnrt.rs/3r40BSx from an average 5% growth rate in the last two decades. The rate plunged by 10.3% annually in the second quarter as the pandemic bit, but rebounded sharply by 6.3% in the third.

Ankara is considering lifting some of the latest virus restrictions as of this month.

Tuvey of Capital Economics said the shift in November to more orthodox policies helped Turkey avoid “a full-blown balance of payments crisis”, and he predicted a sustained recovery may not come until the second half of this year.