The earnings update from Macquarie Group should burst the bubble it has constructed over the past 10 years since the GFC that says its earnings are much more dependable because of its growing reliance on annuity type investments.

Monday’s COVID-19 impacted forecast that its profits will fall 35 per cent in the September half relative to the previous corresponding is a reality check. Sure Macquarie’s earnings are less volatile than they were during the global financial crisis but they remain volatile nonetheless.

It serves as a reminder that while Macquarie has produced much better returns than the market average, it is not a defensive business. And for the first time since the GFC Macquarie is not providing guidance for the full year to the end of March 2021. 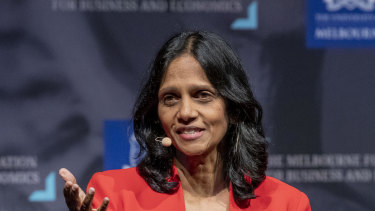 On Monday investors got a taste of just how leveraged Macquarie’s earnings are to the markets and economic environments in which it operates – and how susceptible those earnings are to shocks the size of the current black swan event.

It has leverage to the upside also, so at some point when markets and economies return to normal Macquarie should return to its positive trajectory. Therefore when the environment is favourable it over-earns. But when things go wrong it can receive a disproportionate hit to earnings. So large is Macquarie’s leverage – its cost base relative to revenue – that a relatively small fall in revenue can have a big impact on its bottom line.

Regardless, the earnings can be lumpy – not the least of which is due to the fact that it sells large assets in any time period which can bolster profits in particular periods. Just how much money it makes either in good times or bad can be difficult to predict. The financial services group has a lot of moving parts.

In the current half to September 2020 it has been hit by more negatives than could be offset by positives. For example, the rash of corporate equity raisings and wild swings in markets in the first few months of COVID was a positive for the group. But markets have settled and so has that burst of revenue from equities, commodities and interest rates trading.

On the lending side, Macquarie has experienced the same pressures as our major trading banks with deferred interest on lending to small business and consumers resulting in a hit to income and an increase to the risk for bad debts.

Macquarie is also a big player in the airline leasing industry which has been devastated by COVID-19. Not surprisingly it has needed to increase provisions on lending.

Releasing its full-year results back in May, Macquarie reported that credit and impairment charges nearly doubled to $1.04 billion for the 2020 financial year and said it would increase provisioning.

The base fees from its infrastructure investments remain a steady and predictable source of income but additional performance fees are not steady and in the current environment these could come under pressure.

So when it quotes that annuity-style activities make up 63 per cent of its business mix in 2020 (relative to 25 per cent back in 2007) this includes revenue that can move about significantly.

Lastly, Macquarie's ability to receive top dollar for churning assets has also come under pressure and traditional buyers have been keeping their powder dry in these uncertain times.

Despite Macquarie’s update on the fall in the earnings this half, most professional investors remain keen cheerleaders of the company and its chief executive Shamara Wikramanayake. For 10 years it has vastly outperformed the broader market.

It continues to be one of the most innovative companies on the Australian market which has earned it plenty of rusted-on supporters among the investing public. In this respect Macquarie is a "future-facing" business that relies on evolving models rather than defending past models.

The 4.5 per cent fall in its share price on Monday reflects the fact that it undershot analysts' expectations – which were themselves quite diverse.

14/09/2020 Markets Comments Off on The Macquarie bubble has burst, unearthing its COVID vulnerabilities
World News