Take-Two Interactive, the video game giant known for Grand Theft Auto and Red Dead Redemption, has announced it will buy Zynga, the mobile gaming company behind titles including FarmVille and Words with Friends, in a cash and stock transaction valued at approximately $12.7 billion, or $9.86 per Zynga share.

Under the terms of the agreement, Zynga stockholders will receive $3.50 in cash and $6.36 in shares of Take-Two common stock for each share of Zynga common stock outstanding at the closing of the transaction. The purchase price represents a premium of 64% to Zynga’s closing share price on Jan. 7, 2022.

Upon closing of the transaction, current Take-Two stockholders will own between 67.2% and 70.4% of the combined company on a fully diluted basis, while current Zynga stockholders are expected to own between 29.6% and 32.8%.

The transaction is expected to close during Take-Two’s first quarter of fiscal year 2023, subject to approval by Take-Two and Zynga stockholders and regulators. The merger agreement includes a go-shop provision, which gives Zynga 45 days to "actively solicit, receive, evaluate, and potentially enter negotiations with parties that offer alternative proposals."

Shares of Zynga have surged 47% during Monday's trading session, while Take Two Interactive shares have slipped more than 12% following the announcement.

"This strategic combination brings together our best-in-class console and PC franchises, with a market-leading, diversified mobile publishing platform that has a rich history of innovation and creativity," Take-Two Interactive chairman and CEO Strauss Zelnick said in a prepared statement.

Zelnick will continue to retain his roles in the combined company, which will be led by Take-Two management. Meanwhile, Zynga CEO Frank Gibeau and president of publishing Bernard Kim will oversee the integration and day-to-day operations of the combined Zynga and T2 Mobile Games business, which will operate under the Zynga brand as its own label within Take-Two. 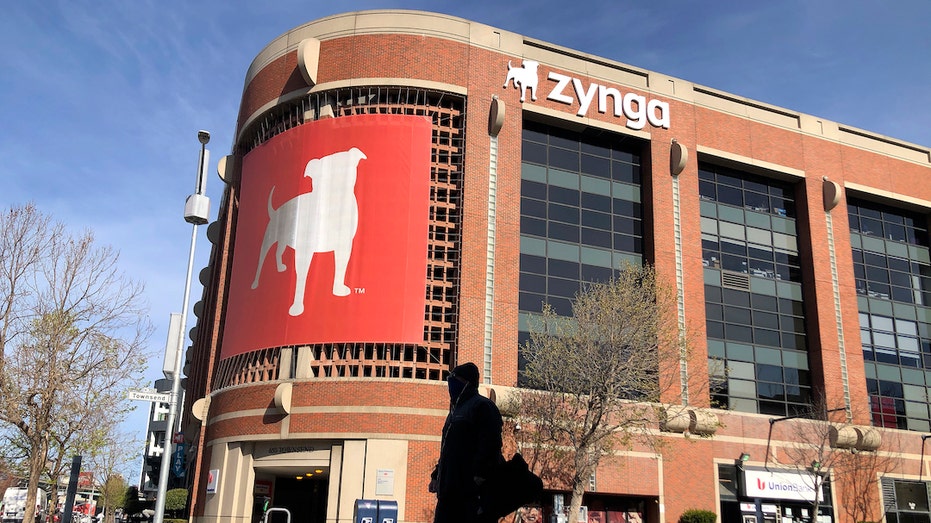 A pedestrian walks in front of a sign at Zynga in San Francisco, Tuesday, March 16, 2021. (AP Photo/Jeff Chiu, File)

Zelnick expects the deal to deliver $100 million in annual cost synergies within the first two years post-closing and at least $500 million of annual net booking opportunities over time.

Mobile gaming is the fastest growing segment in the video game sector, with an estimated $136 billion in gross bookings in 2021 and a compound annual growth rate of 8% expected over the next three years.

The combined company is expected to deliver a 14% compound annual growth rate for net bookings from fiscal years 2021 through 2024.