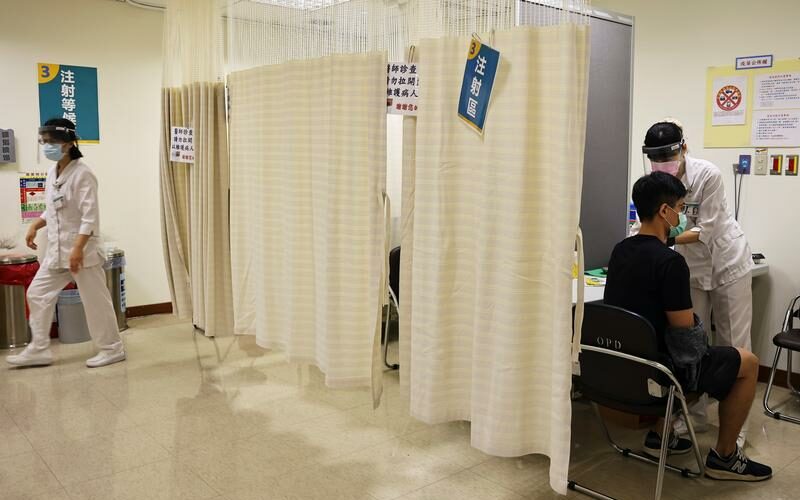 TAIPEI (Reuters) -Taiwan’s health minister said on Friday he had spoken to his U.S. counterpart to ask for help in obtaining COVID-19 vaccines amid a spike in infections on the island and the U.S. health secretary would take the matter to President Joe Biden.

The news drew a swift rebuke from China, where Foreign Ministry spokesman Zhao Lijian told reporters in Beijing that Taiwan was using the pandemic for “political manipulation”. Beijing routinely condemns any high-level contacts between Washington and the island which China claims.

Having for months been held up as an example of how to stop the virus in its tracks, Taiwan has over the past two weeks reported a spiralling number of infections in the community, with some 1,800 cases.

Health Minister Chen Shih-chung said the situation remained at its peak but there were no “sudden situations” that had arisen, with authorities able to track the sources of most infections.

Taiwan’s battle against the virus has been complicated by a lack of vaccines, with only about 700,000 arriving to date, including 410,000 this week, all AstraZeneca Plc shots.

Chen said he had spoken with Health and Human Services (HHS) Secretary Xavier Becerra on a video conference call about medical cooperation, the highest level contact between the two governments since Biden was inaugurated in January.

“More importantly, we brought up that Taiwan’s pandemic is increasing, and at this point we have an urgent need for vaccines, and hope he can support Taiwan when it comes to the vaccines the United States are going to release,” Chen said.

In response, Chen said Becerra said Taiwan’s needs will be considered and he will take the matter to the president.

A statement from the HHS’ Office of Global Affairs on Twitter said the U.S. supports Taiwan’s ability to access vaccines, its contributions to health security, and its return to observership at the World Health Organization’s decision-making body the World Health Assemble, which China has blocked.

Biden said this week he will send at least 20 million more COVID-19 vaccine doses abroad by the end of June, marking the first time the United States is sharing vaccines authorised for domestic use.

The United States, like most countries, has no formal diplomatic relations with Taiwan.

China reacted with fury when Alex Azar, the Trump administration’s health secretary, came to Taipei in August, sending fighter jets near the island.

Taiwan’s current spike in domestic COVID-19 infections has not rapidly accelerated, with the island reporting 312 new cases on Friday, a slight rise from the 286 reported on Thursday.

Minister Chen said this weekend would be critical in bringing the pandemic under control and he called on people to stay at home as much as possible.

“If the flow of people can be reduced to a minimum during these two days, the chain of transmission will be gradually cut off, which will be very useful,” he said.