Hong Kong (CNN Business)Global stock markets were struggling Wednesday to digest a tweet storm from President Donald Trump over what the US government should do next to prop up ailing businesses and the economy.

Just hours after Trump’s decision to halt negotiations on a major economic stimulus package caused US stocks to plummet, he called on US lawmakers to approve smaller measures that would provide relief to airlines and small businesses.
“The House & Senate should IMMEDIATELY Approve 25 Billion Dollars for Airline Payroll Support, & 135 Billion Dollars for Paycheck Protection Program for Small Business,” Trump tweeted late on Tuesday. “Both of these will be fully paid for with unused funds from the Cares Act. Have this money. I will sign now!”

He later added that he was “ready to sign” a “Stand Alone Bill for Stimulus Checks ($1,200).”
The head-snapping social media proclamations added to confusion about the prospect of further stimulus this year. On Tuesday, Federal Reserve Chairman Jerome Powell called for more relief to help sustain the fragile recovery before Trump put stimulus negotiations on hold. 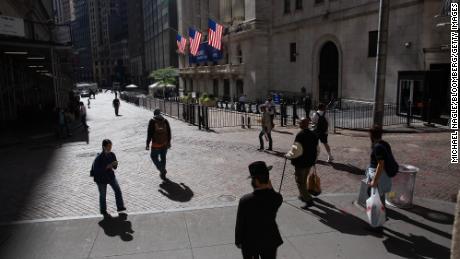 “This appears to be a none too subtle effort to cherry-pick the bits of a fiscal stimulus plan that are directly vote-winning potentially,” said Jeffrey Halley, senior market analyst for Asia Pacific at Oanda. “Whether the American public buys it or not is another thing altogether.”
US futures moved higher overnight, with the Dow (INDU), S&P 500 (SPX) and Nasdaq (COMP) on track to open with gains of roughly 0.6%. That followed a rocky ride Tuesday, when the Dow swung more than 600 points after Trump called off stimulus talks and closed down 376 points, or 1.3%, lower. The S&P 500 and Nasdaq Composite were also hammered.
European markets were flat in early trading Wednesday, while stocks in Asia were mixed. Hong Kong’s Hang Seng (HSI) rose 1.1% and South Korea’s Kospi (KOSPI) was up 0.9%. But Japan’s Nikkei (N225) closed with small losses.
Investors had been hoping that Washington would approve a financial plan to help the country through its worst economic crisis in generations. A Trump tweet dashed those hopes.
“I have instructed my representatives to stop negotiating until after the election when, immediately after I win, we will pass a major Stimulus Bill that focuses on hardworking Americans and Small Business,” he tweeted just before 3 p.m. ET.
As recently as Saturday, Trump had backed efforts negotiate another significant round of stimulus. “OUR GREAT USA WANTS & NEEDS STIMULUS. WORK TOGETHER AND GET IT DONE,” he directed lawmakers via Twitter.
With the election entering its final weeks, it now appears unlikely that lawmakers will deliver stimulus on the scale economists say is needed.

“Clearly, the President is looking to turn the tables and take back control of the election narrative and put the ball back in the Democrats’ court,” wrote Stephen Innes, chief global market strategist at Axi Corp, on Wednesday.
— Jazmin Goodwin and Anneken Tappe contributed to this report.
Source: Read Full Article