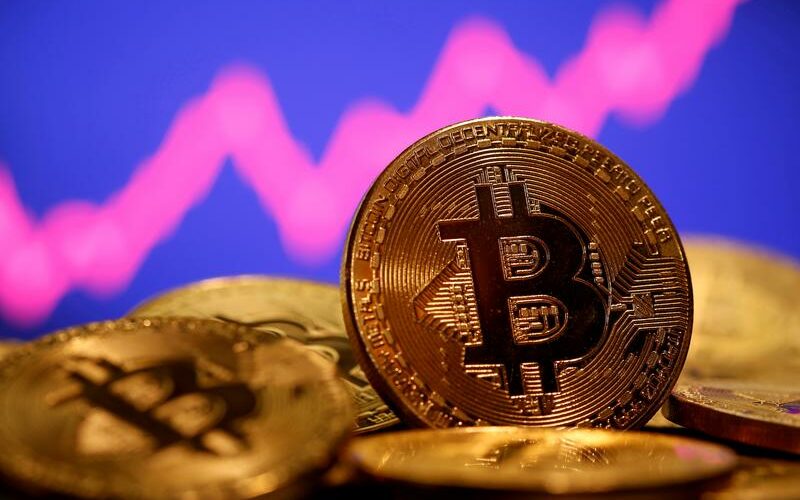 FILE PHOTO: A representation of virtual currency Bitcoin is seen in front of a stock graph in this illustration taken January 8, 2021. REUTERS/Dado Ruvic

Wood, whose $24.4 billion ARK Innovation exchange-traded fund is the largest actively managed ETF tracked by Lipper, said in an interview on Benzinga’s YouTube channel that her fund remains “opportunistic” despite the recent slide in the S&P 500 as investors have raised concerns over valuation and the prospect of higher inflation.

“The benchmarks are filling up with value traps” due to the pace of innovation in fields including artificial intelligence and robotics, Wood said. “We think the big risk is in the benchmarks, not what we’re doing.”

The S&P 500 stock index fell 1.3% Wednesday. On Feb. 25, the tech-heavy Nasdaq index fell 3.5%, its biggest daily decline in four months. Both indexes churned in January but remain up year to date.

Wood, who founded the firm in 2014, has become one of the faces of the U.S. stock market rally during the coronavirus pandemic. The ARK Innovation fund is up 136% over the last 12 months. The fund fell 6.1% on Wednesday and is up less than 1% for the year to date.

Tesla Inc, which accounts for roughly 10% of the Ark Innovation fund’s portfolio, remains attractive given its lead in autonomous driving, she said. Shares of the company are up nearly 345% over the last 12 months despite dropping nearly 20% over the last four weeks.

“Our conviction on its autonomous strategy has increased,” she said.

At the same time, companies that rallied during the pandemic such as Zoom Video Communications Inc and television streaming platform Roku Inc remain attractive given their expected growth rates over the next five years, she said.

Shares of Zoom are “probably undervalued”, while Roku and Amazon.com Inc “will take the lion’s share of the connected TV market,” Wood said.

Along with technology stocks, Wood said she expects the price of bitcoin will keep rising as more U.S. companies diversify cash holdings and add the cryptocurrency to their balance sheets. Tesla Inc, for instance, said on Feb. 8 it had purchased $1.5 billion worth of bitcoin, while Square said on Feb. 23 it added another $170 million to its bitcoin position in the fourth quarter.

The cryptocurrency rose 7.5% to $51,030 in Wednesday afternoon trading.