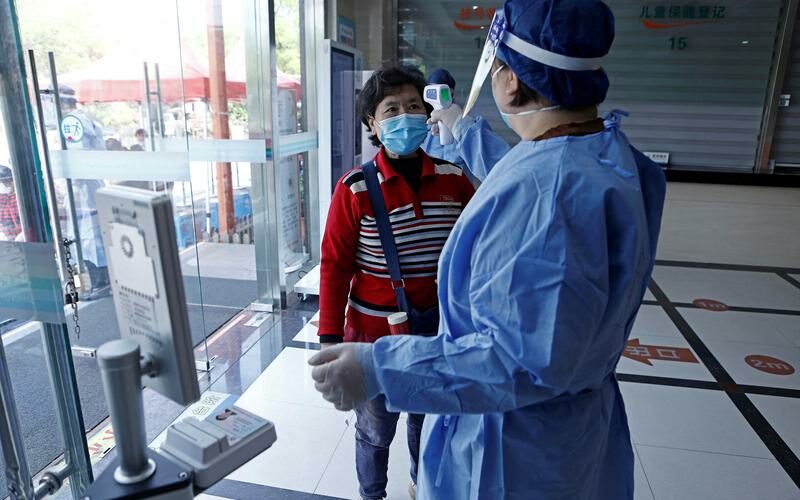 FILE PHOTO: A worker in a protective suit measures the body temperature of a woman during a vaccination session against the coronavirus disease (COVID-19) for elderly people, at a community health service centre in Fengxian district of Shanghai, China April 21, 2022. Picture taken April 21, 2022. cnsphoto via REUTERS

SHANGHAI (Reuters) – The COVID-hit city of Shanghai is making more resources available to improve vaccination rates among the elderly as daily case numbers decline and it looks for a way out of four weeks of stringent lockdown restrictions.

The city, battling China’s biggest ever coronavirus outbreak, saw new asymptomatic cases fall to 9,330 on April 27, down 22% from a day earlier and its lowest rate in 24 days, with symptomatic infections also down by almost a fifth.

With the outbreak still at a critical stage, every district in Shanghai is now coordinating “prevention and control” work with a vaccination drive focusing on elderly people, said Zhao Dandan, the deputy director of the municipal health commission.

“On the condition that epidemic risks are controlled, and with the elderly as the focal point, we are actively promoting COVID-19 vaccinations,” he told a briefing on Thursday. He said districts were now arranging community vaccination vehicles and setting up temporary vaccination stations in care homes.

Though the more infectious Omicron variant is less virulent than its predecessors, Chinese medical experts have justified the country’s heavy-handed “dynamic zero” response by pointing out that thousands of people could still die if it spreads into its vulnerable elderly population.

The 47 people reported to have died from COVID-19 in Shanghai on April 27 had an average age of 84.7 years. Of the city’s 285 COVID-related fatalities this year, the vast majority have been elderly, with many unvaccinated and suffering from underlying health conditions.

Zhao told the briefing that 3.6 million residents aged 60 or over had received a full vaccination so far, amounting to 62% of the city’s total population in that age bracket. He said 38% of the over sixties had also received a booster jab.

The number of infections outside of quarantined areas in Shanghai reached 192 on April 27, up from 171 the previous day. The city aims to bring the number down to zero.

Zhao said on Wednesday that those areas that had stamped out infections outside of the quarantine zones would be allowed to relax restrictions.