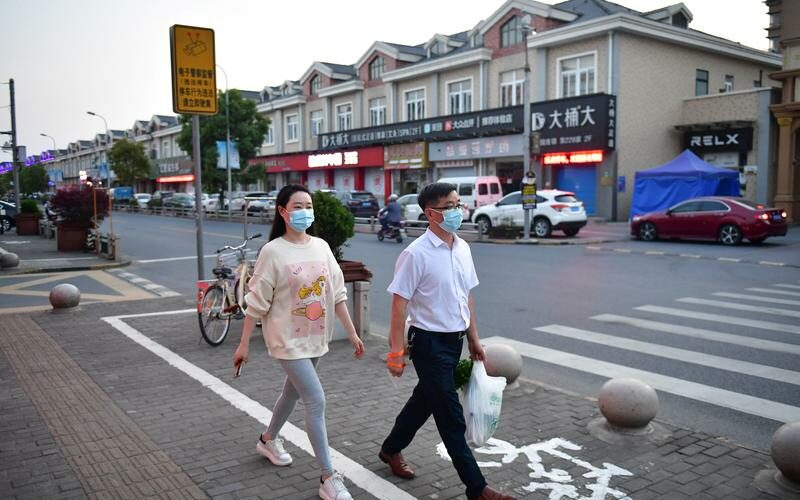 SHANGHAI (Reuters) -Some Shanghai residents were able to leave their homes for the first time in more than two weeks on Tuesday as the city took tentative steps towards easing a COVID-19 lockdown amid mounting worries over the economic impact of the strict curbs.

Residents walk on a street in Fengjing town of Jinshan district, as the city eases the lockdown in some areas amid the coronavirus disease (COVID-19) outbreak, in Shanghai, China April 11, 2022. Picture taken April 11, 2022. cnsphoto via REUTERS

With a quarter of the population under what brokerage Nomura described as “full or partial lockdowns,” China’s leadership is taking increasing steps to ease the economic toll of its “zero-COVID” strategy, but remains reluctant to risk larger waves of infection.

German auto parts giant Bosch and Taiwan’s Pegatron Corp, which assembles iPhones for Apple Inc, said on Tuesday they had suspended operations at their China plants due to the restrictions, underscoring the risks both to China’s economy and global supply chains.

Shanghai said on Monday that more than 7,000 areas – which local media reported as home to about 4.8 million of its 25 million residents – had been classified as lower-risk after no new infections for 14 days. Local officials have been announcing which residential compounds can open up.

But while some people were allowed out on Tuesday, there was still confusion about how freely they could move, with many awaiting permission from their residential committees.

One resident said she briefly left home for a scooter ride after getting permission from her compound, only to be told later that she could no longer do so.

“You know how it all changes very fast … if you can go out you better do so quickly because you won’t know if it could change in the next hour,” she said, declining to be named.

Officials say daily infection rates were likely to remain high in the next few days, with Shanghai still struggling to get to grips with the outbreak – China’s biggest since the coronavirus was discovered in late 2019 in the central city of Wuhan.

“The epidemic is in a rapid increase phase, with social transmission still not brought under effective control,” Lei Zhenglong, of the National Health Commission, told a briefing in Beijing.

“The forecast for the next few days is that the number of infected people will remain at a high level,” he said.

Amid concerns about the tough curbs, the U.S. State Department ordered non-emergency government workers to leave its consulate in Shanghai.

Bosch suspended output at sites in Shanghai and the city of Changchun in COVID-hit Jilin province, while putting two other plants – one in Shanghai and another in neighbouring Taicang – under “closed-loop” operation, with workers isolated inside.

Pegatron said it halted operations at its plants in Shanghai and neighbouring Kunshan, citing government measures to control the spread of infection.

Nomura estimates that as many as 45 cities in China are now implementing either full or partial lockdowns, making up 26.4% of the country’s population and 40.3% of its GDP.

The outbreaks have added to inflationary pressures as residents hoard goods and transport restrictions erode supplies, but that has been partly offset by weaker demand as incomes decline, Chinese brokerage Cinda Securities said, adding that relief measures were needed urgently.

Premier Li Keqiang warned on Monday that China needed to be “highly vigilant” against further downward economic pressures and said the fight against COVID-19 needed to be “coordinated” with economic and social development.

China is also encouraging long-term investors to buy more equities and major shareholders of listed firms to increase their holdings when stocks slump, in a bid to stabilise a stock market rocked by the worsening outbreak, the country’s securities watchdog said late on Monday.

Liu Min, vice head of Shanghai’s commercial commission, said efforts were being made to reopen supermarkets, convenience stores and pharmacies, but non-essential businesses will remain suspended.

Many in the city still struggled to buy food. E-commerce giant JD.com, which received a license on Saturday to supply the city, came in for online criticism on Tuesday when shoppers found that delivery dates had been pushed back more than a week.