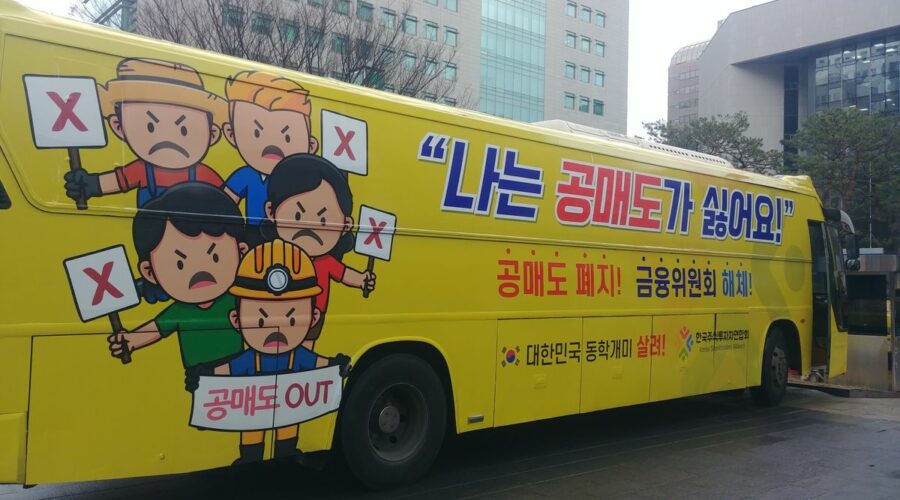 In the U.S., small investors have defied short-sellers by banding together online, renting billboards in Times Square and even flying banners from planes; in Korea, they are driving a bus.

A group of influential Korean retail traders has declared “a war against short sellers,” under a campaign they are calling “K-streetbets,” mimicking the punters on Reddit’s now-famous WallStreetBetsforum who coordinated a surge in video-game retailer GameStop Corp. to squeeze short-sellers.

On Saturday, the Korea Stockholders Alliance launched a “bus campaign” to get its anti-short-selling message heard.

The bus is painted with cartoons of people holding up signs that say things such as “I hate short-selling”, “short-selling should be abolished” and a call to have stocks regulator Financial Services Commission, which is in charge of resuming short-selling, “disbanded”. It will start driving around the capital Seoul from today for an hour every day until sometime in March. On its route: the Blue House, the FSC building, and the National Assembly in the city’s financial district.

The push is the latest by the almost 30,000-strong group of day traders to make permanent a ban on short-selling imposed by Korea early last year to tame its markets as the pandemic spread.

Korea imposed a ban on short-selling in March last year, joining several countries like France and Italy in halting trades against borrowed stock to tame markets as the pandemic worsened. This month, Indonesia willdrop its ban, leaving just Korea as a major market globally that doesn’t allow the trading strategy. Korea is planning to extend the ban beyond its March 15 expiry, as the retail investors who dominate the stock market increasingly lobby against shorts.

Short Sellers Under Siege Everywhere Have It Really Bad in Korea

More than 200,000 individual traders in Korea signed an anonymous petition posted on Korea’s presidential website, a threshold that requires President Moon Jae-in to answer the petition.

Short sellers are “Korea’s axis of evil,” Jung Eui-jung, chief executive of the alliance, told Bloomberg in an interview, saying that Korea’s short selling rules favor professionals and not small traders like their group.

Before the ban on shorting was imposed, the retail investors who came to dominate investing in the country last year faced tighter restrictions on short-selling than professionals. They see the trading strategy as the playground of foreign hedge funds intent on hurting local champions.

Jung’s group said on its website that it wants to “protect” Korean companies Celltrion Inc., a $45 billion maker of biosimilars, and HLB Inc., whosecancer drug pipeline led its stock to surge770% in 2019.

— With assistance by Shinhye Kang