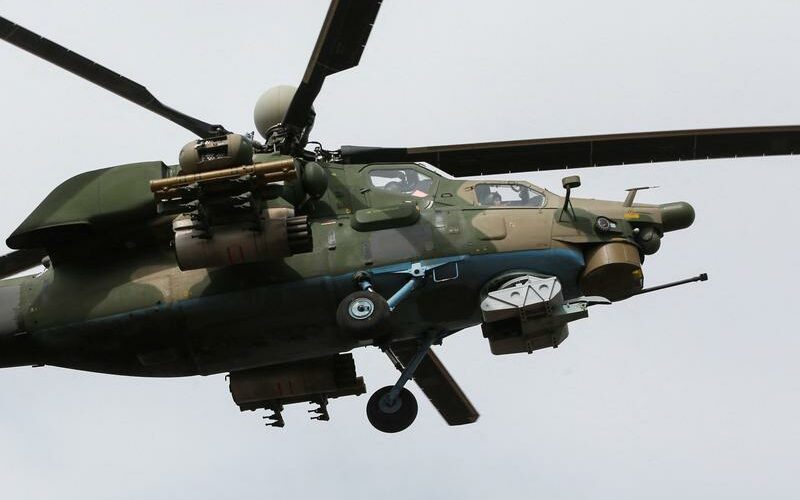 ZAPORIZHZHIA, Ukraine (Reuters) -A Red Cross convoy travelling to the Ukrainian city of Mariupol will make another attempt to evacuate civilians from the besieged port on Saturday as Russian forces looked to be regrouping for new attacks in the southeast.

A Russian Air Force helicopter flies in the course of Ukraine-Russia conflict near the southern port city of Mariupol, Ukraine April 1, 2022. REUTERS/Alexander Ermochenko

Mariupol, encircled since the early days of Russia’s five-week-old invasion, has been Moscow’s main target in Ukraine’s southeastern region of Donbas. Tens of thousands there are trapped with scant access to food and water.

The International Committee of the Red Cross (ICRC) sent a team on Friday to lead a convoy of about 54 Ukrainian buses and other private vehicles out of the city, but they turned back, saying conditions made it impossible to proceed.

“They will try again on Saturday to facilitate the safe passage of civilians,” the ICRC said in a statement. A previous Red Cross evacuation attempt in early March failed because the route was found to be unsafe.

Russia and Ukraine have agreed to humanitarian corridors during the war that have facilitated the evacuation of thousands of civilians.

The ICRC says its Mariupol operation has been approved by both sides, but major details were still being worked out such as the exact timing and destination of the convoy, which would be an undetermined location in Ukraine.

“I hope there may still be solutions for the situation in Mariupol,” Zelenskiy said. “The whole world has to react to this humanitarian catastrophe.”

Russian President Vladimir Putin sent troops on Feb. 24 for what he calls a “special operation” to demilitarise Ukraine.

The West calls it an unprovoked war of aggression that has killed thousands, uprooted a quarter of Ukraine’s population and brought tensions between Russia and the United States to their worst point since the Cold War.

Aiming to lower nuclear tensions with Russia, the U.S. military has canceled an intercontinental ballistic missile test that it had initially aimed only to delay, the Air Force told Reuters.

But the United States and its European allies have sent Ukraine military assistance, including an additional $300 million dollars in aid announced by the Pentagon late on Friday. The new aid includes laser-guided rocket and anti-drone systems.

Citing a U.S. official, the New York Times reported that the United States would work with allies to transfer Soviet-made tanks to Ukraine to bolster its defenses in the Donbas region.

At peace talks this week, Russia said Donbas, where it has backed separatists since 2014, would now be the focus of its war efforts. Russian troops left behind shattered villages and their own abandoned tanks as they moved away from the capital Kyiv.

“You see that (the) enemy overestimates its potential around Kyiv at least. And we keep going forward liberating our cities and evacuating our people,” said Deputy Interior Minister Yevhen Yenin.

After failing to capture a single major city, Russia has painted its draw-down of forces near Kyiv as a goodwill gesture in the peace negotiations.

Ukraine and its allies say Russian forces have been forced to regroup after suffering heavy losses due to determined Ukrainian resistance.

Across the border from Kharkiv in the Russian city of Belgorod, Moscow said Ukrainian helicopters struck a fuel depot on Friday, causing a huge fire. Ukraine denied responsibility for the incident, the first of its kind in the war.

As Ukrainian forces recaptured more territory around Kyiv on Friday, officials in the Black Sea port of Odesa said anti-air defences thwarted an attempted attack on critical infrastructure in the city. Reuters could not immediately verify the account.

Odesa’s governor, Maksym Marchenko, said three missiles had hit a residential district, causing casualties. He said the missiles were fired from an Iskander missile system in Crimea, the southern Ukrainian peninsula annexed by Russia in 2014.

Russia denies targeting civilians. Odesa and Mariupol straddle the Black Sea and have been primary targets of Russia due in part to their strategic location.

Facing unprecedented sanctions over its invasion of Ukraine, Russia had threatened to cut off gas supplies to Europe unless buyers paid with roubles. Europe vowed to stay united against Russia’s demand, and Moscow said it would not halt supplies until new payments are due later in April.

Mediators from Turkey, where the most recent round of face-to-face peace talks were held, and the United Nations have been pressing for a pause in fighting.

United Nations aid chief Martin Griffiths will travel to Moscow on Sunday and then to Kyiv as the U.N. pursues a humanitarian ceasefire in Ukraine, U.N. Secretary-General Antonio Guterres told reporters.