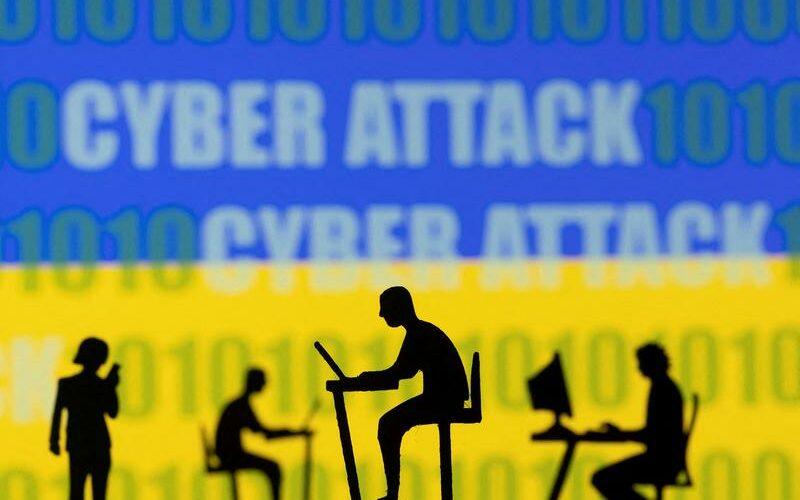 FILE PHOTO: Figurines with computers and smartphones are seen in front of the words “Cyber Attack”, binary codes and the Ukrainian flag, in this illustration taken February 15, 2022. REUTERS/Dado Ruvic/Illustration/File Photo

Kyiv blamed Moscow for the digital disruption amid heightened tensions since Russia began massing more than 100,000 troops near the border, raising fears Russia is planning to attack Ukraine. The Kremlin denied involvement in the denial of service and has repeatedly denied it plans to invade Ukraine.

Ukrainian officials described the outages as the result of “the largest DDoS attack in the history of Ukraine,” but Netscout said that the digital flood was pretty standard.

“It’s possible that it was the largest they’d seen against targets,” said Richard Hummel, who heads the threat intelligence team at Netscout’s ASERT unit.

“It is definitely not the largest we’ve seen.”

Distributed denial of service works by hammering target networks with floods of traffic from multiple sources at once, snarling access to websites and sometimes leading to wider disruption as overwhelmed servers fall offline.

Netscout said its experts had seen floods of data packets reaching 5.2 gigabits per second – hundreds of times less powerful than what it said was the most powerful denial of service of 2021 which clocked in at 3.5 terabits per second.

Hummel cautioned that Netscout’s information was drawn from “observations from the outside looking in,” but his assessment echoed what San Francisco-based Cloudflare, a prominent provider of denial of service protection, told Reuters on Wednesday.

In an email, the company said it had seen no evidence of “large DDoS activity” in Ukraine against its data centres or customers there.