In a scathing assessment of Australia’s corporate and political leaders, former National Australia Bank chairman Ken Henry has revealed the bank’s institutional investors pressured the board to cut costs after the banking royal commission.

Henry, a former Treasury secretary who served as NAB’s chair from 2015 until he resigned in 2018 following an investor revolt over executive pay, described a litany of failures within the bank that he observed during his tenure.

“We did have some bad apples. We did have a cultural problem,” Henry said in an address to the Actuaries Institute’s summit on Tuesday. “Internal compliance systems […] certainly were stretched.” 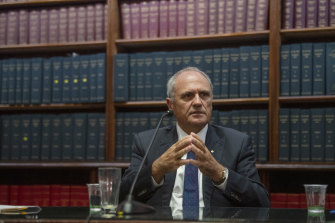 “There was evidence of people cutting corners because of internally generating system complexity, some of which we had not paid nearly enough attention to.

“Our relationship with [corporate regulator] ASIC was not healthy. And we had not had a practice of putting the customer at the centre of product design.”

‘We did have some bad apples. We did have a cultural problem. Internal compliance systems […] certainly were stretched.’

The banking royal commission revealed NAB engaged in bribery, improper expenses and charged customers without providing services, prompting calls on the bank to invest in improving its processes of checks and balances.

At the same time though, Henry said he faced “inappropriate” pressure from investors to cut costs.

“One of those institutional investors told me we should not allow ourselves to be distracted, the hysteria associated with the commission would soon blow over, he had seen it all before.”

Henry said these investors permitted spending on “reputation-enhancing advertising” or “green-washing”, but ultimately the private sector was solely motivated by maximising profits.

Henry resigned from NAB after being personally singled out in the royal commission’s final report for not having learnt from the bank’s misconduct. His defensive responses during the commissions’ public hearings were roundly criticised, and he ultimately stepped down alongside former chief Andrew Thorburn after the bank suffered an investor revolt over executive pay.

Companies around the world are facing unprecedented pressure to place environment, social and governance standards at the heart of operations. Henry said the failure of governments to enact policies to address society’s problems had created unrealistic expectations of the private sector.

“Today, many governments appear wholly disinterested in policy,” he said. “Because of government failure, capitalism has been replaced by something called stakeholder capitalism.”

Henry said it was “plain silly” to expect that community and shareholder interests would converge – even in the long run – because their aspirations were mutually exclusive.

The private sector has enormous influence on society, Henry said, including setting wages, employment levels and the pace of economic and industry development.

“Business decisions shape the world. It’s scarcely surprising then that the community should take interest in the operations of business,” he explained. “At times, and for good reason, it will be disappointed by what it sees.”

Henry said the financial services sector had “attracted a lot of attention” in recent years, but there are “many, many other areas in which Australian businesses have not met community expectations” such as gas fracking, live exports of animals, gambling and coal mines in farming land.

Henry criticised political leaders for engaging in “business bashing” and “pointing an accusatory finger” rather than enacting serious reform to shape the private sector for the better.

“The exercise of effective governments in a democracy depends on elected officials having some detachment from outrage and mania, not seeking energetic immersion in it,” he said.

Australian citizens have “given up on government”, Henry said, before calling on voters to expect more from politicians. “It’s up to the rest of us, as citizens, to elect governments to establish the rules of the game that make this single business focus on profits work for society.”