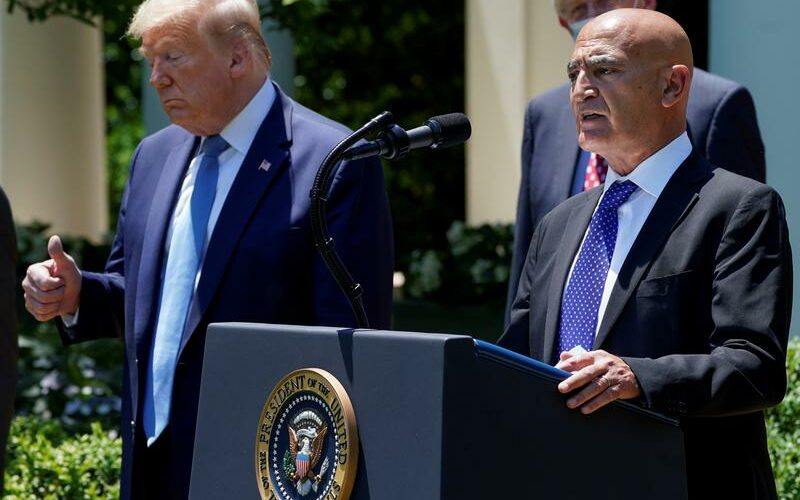 (Reuters) – Moncef Slaoui, the chief adviser for Operation Warp Speed, has resigned but will be available to the incoming Joe Biden administration as a consultant for about four weeks, a Biden transition official told Reuters late on Tuesday.

FILE PHOTO: Former GlaxoSmithKline pharmaceutical executive Moncef Slaoui, who will serve as chief adviser on the effort to find a vaccine for the coronavirus disease (COVID-19) pandemic, speaks as U.S. President Donald Trump listens during a coronavirus disease response event in the Rose Garden at the White House in Washington, U.S., May 15, 2020. REUTERS/Kevin Lamarque/File Photo

Slaoui’s role leading the COVID-19 vaccine development for the government effort is expected to be diminished after Jan. 20, according cnb.cx/3bAxEce to CNBC, which first reported the development.

The Biden team has not asked Slaoui to stay past his current contract, which includes a 30 days’ notice before termination, CNBC said.

The U.S. Department of Health and Human Services, which oversees Operation Warp Speed, did not immediately respond to requests for comment late Tuesday.

The operation started last year as a national effort by the Department of Health and Human Services, and the Department of Defense, aiming to provide substantial quantities of safe and effective vaccines for Americans by January 2021.

However, only about 2.6 million Americans had received a COVID-19 vaccine going into the last day of December, putting the United States far short of the government’s target to vaccinate 20 million people last month.

“We know that it should be better and we are working hard to make it better,” Slaoui said at a media briefing late in December.

Slaoui, a former GlaxoSmithKline executive who had also served on the board of Moderna Inc, was named last spring to spearhead the government’s effort at developing a COVID-19 vaccine on an accelerated schedule.

According to Politico, Slaoui had said he planned to step down by early this year, but last week he said he “decided to extend that in order to ensure that the operation continues to perform the way it has performed through the transition of administration.”