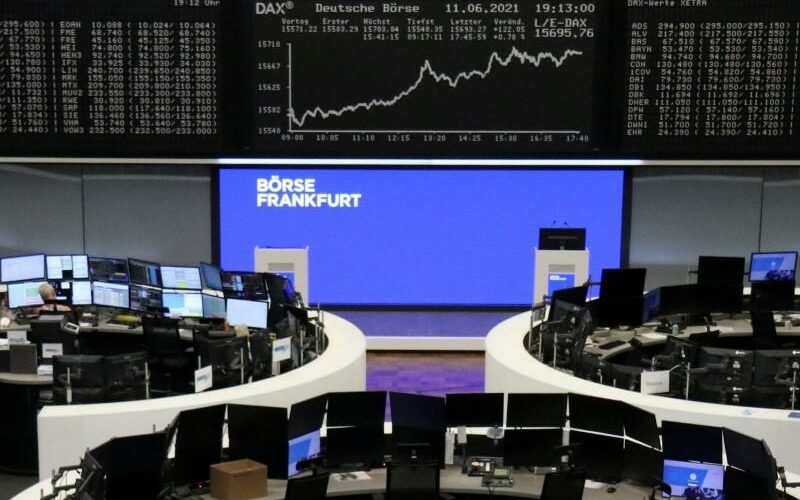 (Reuters) -European shares ended at a record high on Monday as energy stocks surged on strength in the oil market, while expectations of accommodative monetary policy grew even as a global economic recovery picked up speed.

Energy stocks were the best performers, surging 2% as oil prices surged to an over two-year peak on expectations of strong global demand this year. [O/R]

Royal Dutch Shell was the top boost to the sector, rising 2.7% after Reuters reported the firm was reviewing its holdings in the largest U.S. oil field for a potential sale.

“Oil’s resilience in the face of warming U.S.-Iran relations suggests that the supply dynamic continues to play second fiddle to the expectation that demand will keep building into the second half of the year,” said Chris Beauchamp, chief market analyst at IG.

Germany’s DAX came off a record high, while the UK’s FTSE 100 scaled its highest level since February 2020, but trimmed some gains as investors awaited an update on Britain’s COVID-19 lockdown measures.

After the European Central Bank last week kept monetary policy unchanged at accommodative levels, all eyes this week will be on the U.S. Federal Reserve’s policy meeting, with the bank expected to maintain its dovish stance.

Any cues that policymakers might be digging in for a more sustained rise in inflation could spark fears of a sooner-than-expected unwinding of easy money policies and hurt stocks, analysts said.

“If central banks start to lay out a path that involves a withdrawal of stimulus, markets could get spooked. No one is seriously suggesting a rise in rates yet, but there is scope to reduce the monthly bond purchase amount without jeopardising the recovery,” said Michael Hewson, a market analyst at CMC Markets UK.

German software developer Teamviewer AG jumped 5.9% to near the top of the STOXX 600, after it announced a partnership with software giant SAP.

On the other hand, Dutch medical equipment company Philips tumbled 4.2% and was among the worst performers on the STOXX 600 after it said it would recall some CPAP breathing devices and ventilators globally because of a foam part that might degrade and become toxic.