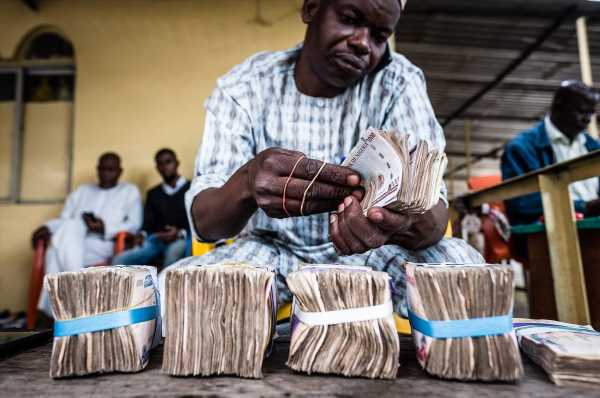 Nigeria’s central bank will probably devalue the naira by as much as 10% this year amid a lingering dollar shortage in Africa’s top oil producer, according to a Bloomberg survey of investors and analysts.

Of the 17 survey participants, eight forecast a devaluation of between 5% and 10% this year. Five saw a devaluation of more than 10% and the remaining four predicted a markdown of as much as 5%. The median of analysts’ estimates project the naira at 426.5 per dollar by the end of 2021, from around 393 on Wednesday.

A dollar squeeze continues to weigh on the naira even after the Central Bank of Nigeria was forced to weaken its official rate twice last year after a sharp drop in the price of oil, the country’s main export and source of greenbacks.

A recovery in crude prices to pre-pandemic levels could help the central bank keep its grip on the currency, but not for too long.

“If you don’t have sufficient dollars, the idea that you’re controlling the naira is a fiction,” said Andrew Nevin, a partner and chief economist for Nigeria at PricewaterhouseCoopers LLP. “It is impossible to get sufficient investment for the economy to grow above 6% without a unified exchange rate.”

Sunk in recession and starved for cash, the government of President Muhammadu Buhari, who has promised 10% annual growth,agreed to merge the country’s multiple exchange rates and allow the naira to float more freely. The World Bank is withholding a $1.5 billionloan until the government moves ahead with currency reforms to attract investment.

Still, there are signs the central bank is allowing for an additional depreciation of the exchange rate for investors and exporters, known as Nafex, toward 400 per dollar, said David Cowan, the London-based Africa economist at Citigroup Inc.

“Once this important psychological barrier is breached, it may allow it to slip more significantly in early 2021,” Cowan said.

The naira weakened 1% on the spot market to 393.95 on Thursday, while it traded at 473 on the paralell market, according to abokifx.com, which tracks street prices. Nigeria has one of the widest spreads between 12-month currency forwards and one-month contracts among its peers on the continent, suggesting traders expect a large depreciation.

— With assistance by Tope Alake