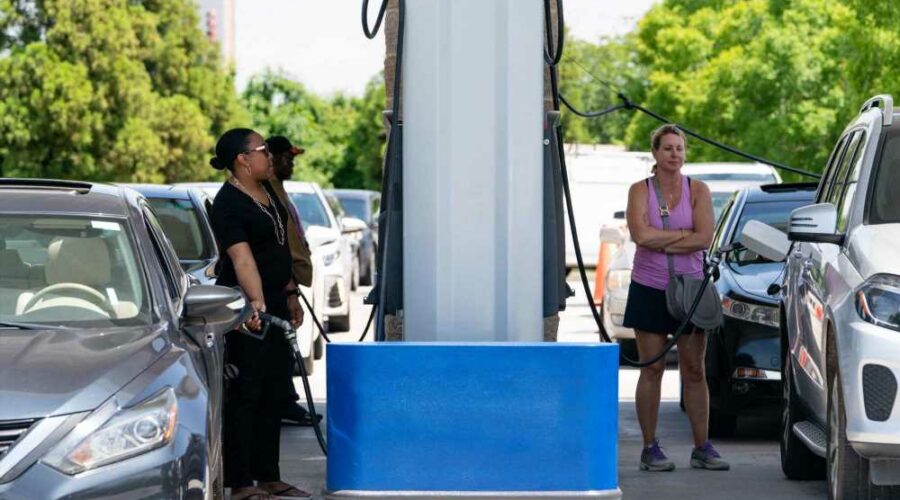 Gasoline prices are expected to be the highest for a Memorial Day weekend in seven years, and prices could stay elevated all summer, as Americans take to the road in a post-pandemic driving spree.

The current average price for a gallon of unleaded gasoline of $3.04 per gallon, 16 cents more than a month ago and $1.08 per gallon higher than last year, according to AAA. The motor club federation expects 37 million Americans to travel this weekend, a 60% increase over last year when the economy was still shut down.

Gas prices jumped earlier this month, particularly in the southeast, after the Colonial Pipeline went off line for six days following a ransomware attack. In some southern states, gasoline jumped more than 20 cents per gallon as panicked drivers filled their tanks and shortages shut down stations.

Gasoline demand last week reached 9.5 million barrels a day, the highest since March 13, 2020, which was just when the economy began to shut down, according to the latest Energy Information Administration data.

"There's part of me that feels like the market has a potential to overheat this summer, just because people are stuck here," said Patrick De Haan, head of petroleum analysis at Gas Buddy. De Haan expects more driving vacations since international travel is still difficult. "Everyone wants to get out. If there's any hiccup in the system this summer, it's going to be hard to fuel up."

De Haan said more of a concern is that prices will jump this summer if there are any refinery outages or hurricanes disrupting the flow of crude or refined product. "Usually when prices go up 50 cents, people say they'll just stay home, but not this year, with the pent-up demand. If there's any kinks in the system, it could get ugly," he said.

AAA warned that some stations in the southeast could continue to experience supply strains during the three-day Memorial Holiday weekend, but drivers should still be able to fill up. Stations in popular travel areas, like beaches, mountains or national parks could face low supplies.

De Haan said a GasBuddy survey showed that 53% of Americans said gas prices are irrelevant to them, and 57% expect to take at least one road trip, up from 31%. "I think it's possible that we will have some blockbuster weekends that break records. It's just because Americans have been stuck at home," he said.

Gas prices could range from a low of $2.75 per gallon of unleaded, to $3.25 per gallon during the summer, he said. De Haan and other experts say the national average for gasoline could continue to dip as prices fall in the areas hit by the pipeline outage. The Colonial pipeline takes gasoline from Texas, across the south and north to New Jersey.

Gasoline prices usually peak early in the summer driving season, but experts say it's possible there will not be a peak before the Fourth of July.

"I do think we'll see a June swoon," said Tom Kloza, global head of energy analysis at OPIS. But he said he expects gasoline prices to stay around $3 per gallon. Kloza said there is already pressure on the system from a shortage of tank truck drivers that could make gasoline deliveries more difficult in areas that are far from storage terminals.

"I think it's going to be very lumpy," he said, noting that demand could surge some days to a high of 10 million barrels a day.

Kloza expects prices to be lower by the July 4 holiday, but any issue could take them higher. He said refining capacity should be sufficient unless there are unexpected outages or storms that take them off line. That could cause supply issues.

Kloza does not expect prices to flare up to the $3.50 per gallon that was common in 2008 and between 2011 and 2014. Those retail prices came as prices for Brent crude rose well above $100 a barrel, and bullish forecasts project Brent could reach just $80 this summer, he added.

John Kilduff, founding partner of Again Capital, expects that rising oil prices could keep the pressure on fuel prices this summer. He expects West Texas Intermediate crude, which are at about $66 per barrel, to rise as high as $70 to $75 per barrel this summer. Brent could reach $75 to $80 per barrel. It's now at $68.66 a barrel.

He said it's unclear whether OPEC will put any barrels back on the market, keeping supplies tight as demand rises. "This summer is going to be a tough summer at the pump for consumers," he said.