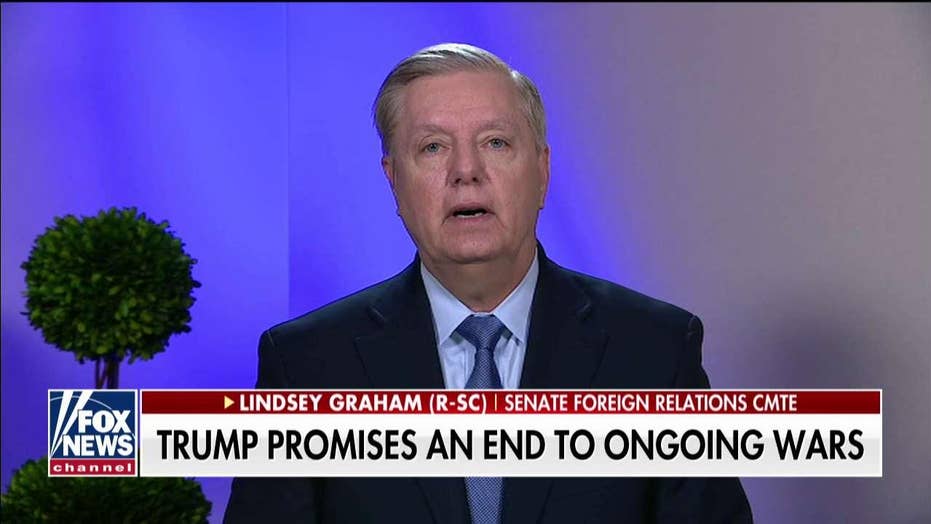 Lindsey Graham warns Trump on troop withdrawal: ‘Would be the biggest mistake of his presidency’

Sen. Lindsey Graham, R-S.C., says if Trump follows through with planned troop withdrawal it could be one of the biggest follies of his presidency.

If President Trump follows through on his proposed troop withdrawal from Syria, it would be one of the biggest follies of his presidency and cause ISIS to reemerge in the region, Sen. Lindsey Graham, R-S.C., said Wednesday on "Fox & Friends."

Trump tweeted about the issue on Wednesday and said the United States should never have been in the Middle East in the first place. He also put the onus on Turkey to stabilize the region and take up arms against any remaining ISIS elements.

"That's a pre-9/11 mentality that the Middle East is no concern to us," Graham told Fox News. "I hope President Trump's right. I hope we can turn the fight against ISIS over to Turkey. I hope that Turkey, when they go into Syria, they won't slaughter the Kurds… If [Trump] follows through with this, it'd be the biggest mistake of his presidency."

He claimed that if Trump doesn't continue with safe zone border patrols, ISIS will fill the void and the fault will lie squarely with the Trump administration.

"I would argue for him to go back to the status quo," Graham said. "The safe zones were working. Patrolling with Turkey and international forces to protect the Kurds and Turkey is the way to go. If we pull out, the Kurds are in a world of hurt and ISIS comes back, and President Trump will own it."

Turkish troops have reportedly crossed the border into Syria after Trump said he would destabilize the Turkish economy if they went too far.

"As I have stated strongly before, and just to reiterate, if Turkey does anything that I, in my great and unmatched wisdom, consider to be off limits, I will totally destroy and obliterate the Economy of Turkey (I’ve done before!)" Trump tweeted.

"They must, with Europe and others, watch over the captured ISIS fighters and families. The U.S. has done far more than anyone could have ever expected, including the capture of 100% of the ISIS Caliphate. It is time now for others in the region, some of great wealth, to protect their own territory. THE USA IS GREAT!"

Graham said former President Barack Obama made the same mistake with Iraq and encouraged Trump to stick with his current strategy because it was producing results.

"Obama did the same thing in Iraq," he said. "The Trump way of doing business worked. We destroyed ISIS with the help of the Kurds… We can't abandon the Kurds now. We can't turn it over to Turkey. To think that will work is really delusional and dangerous."

09/10/2019 Markets Comments Off on Lindsey Graham warns Trump on Syria troop withdrawal: 'It'd be the biggest mistake of his presidency'
World News