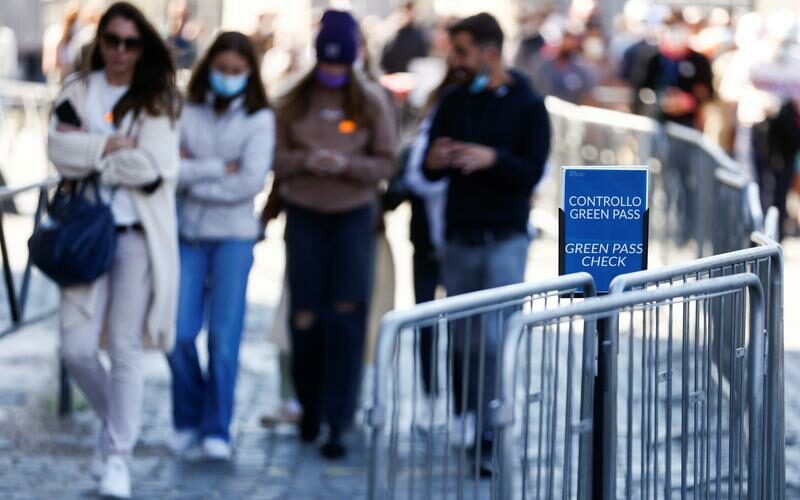 ROME (Reuters) – COVID-19 health passes will be mandatory for all workers in Italy from Friday, a measure that some politicians, unions and businesses fear will cause shortages and disruptions rather than boost inoculations and output as the government hopes.

Prime Minister Mario Draghi’s cabinet approved the rule – one of the world’s strictest anti-COVID measures – in mid-September, making it obligatory from Oct. 15 for all workers either to show proof of vaccination, a negative test or recent recovery from infection.

The government hoped the move would convince unvaccinated Italians to change their minds, but with over 80% of residents over the age of 12 already fully inoculated and infection rates low, that surge has not materialised.

The rightist League and Brothers of Italy parties and some unions say that, to address the risk of staff shortages, the validity of COVID tests should be extended from 48 to 72 hours, and they should be free for unvaccinated workers.

“We will not be able to grant a swab every 48 hours to all the unvaccinated. The business people I am in contact with are extremely worried,” said the League’s Luca Zaia, governor of the wealthy north-eastern region of Veneto.

Some 15% of private and 8% of public sector workers have no Green Pass, an internal government document seen by Reuters estimates.

Under the new rules, effective until year-end, they will be suspended without pay and face a fine of up to 1,500 euros ($1,730) if they try to work on regardless.

The Green Pass policy has the backing of a majority of Italians, polls show, but it has also triggered angry demonstrations, and workers who have declined to get vaccinated have threatened to block the major port of Trieste if it is not rescinded.

Draghi has support from industrial lobby Confindustria, whose vice-president denied businesses risked being disruption and said it would favour of making the vaccine mandatory.

But unions say the pass is not enough to ensure workplace safety from COVID and have criticized the decision to suspend the salaries of “no-vax” workers.

“This is a very restrictive measure that could have a serious impact on social stability and exacerbate an already complicated situation,” the UIL union said in a statement.