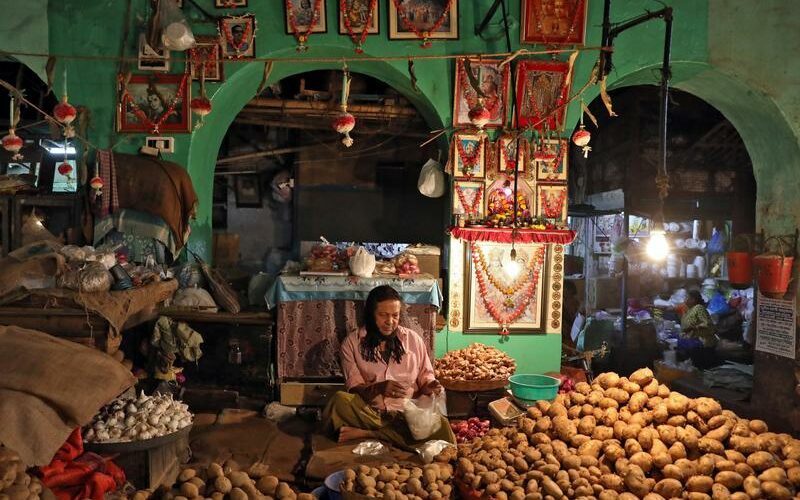 A vendor waits for customers at his shop inside a vegetable market in Kolkata, India, February 12, 2020. REUTERS/Rupak De Chowdhuri/Files

Analysts in a Reuters poll had predicted annual inflation at 5.40% for the month.

“Industrial production has contracted at a much faster-than-expected pace of 3.6%, led by a steep contraction in mining and manufacturing sectors. It is clear that restrictions and restraints in response to the second wave of COVID have started impacting overall demand and growth.

“Despite weak demand trends, CPI inflation is firming up on higher food and fuel inflation and elevated transportation costs. Core inflation too has risen to 5.76%.”

“March CPI rose expectedly to 5.5% (5.6% our estimate) due to weak base from last year and higher fuel prices. We believe March CPI to be the peak and see headline inflation easing towards 4.5% due to stabilization in international commodity prices and weak pass-through to final prices given that growth momentum will soften on COVID 2.0.

“However, there is a risk that the second wave distorts the supply of goods and labour yet again thereby adding to inflation impulse.”

“We estimate CPI inflation to average 5% on-year in FY22, above RBI’s medium-term target of 4%. We expect the near-term inflation trajectory to be affected by progress of 2021 south-west monsoon, movement in global commodity prices and logistics cost pressure.

“We will also be closely monitoring a resurgence in COVID-19 cases in India, localised and regional lockdowns and its impact on mobility restrictions for any supply-side price pressures.

“We expect the RBI to keep repo rate on hold in FY22 and also maintain comfortable liquidity in the near term to ensure least disruption to the government’s borrowing programme and support the economic recovery at a time when COVID-19 cases are resurging in India.”

“However, the Monetary Policy Committee (MPC) will likely look through the current spike in inflation even if it reaches near the upper end of the RBI’s target band and continue to focus on supporting growth recovery.

“The sharp worsening in the COVID-19 situation will mean fresh headwinds for growth recovery and rising uncertainties for financial markets. That will likely prompt the central bank to keep the key policy rates on hold in the coming months while staying supportive on the liquidity front and providing support to the bond market.”

“A handful of perishable food items have pushed up inflation for the month of March 2021. The inflation print also reflects rising global food prices. But the most worrying part is the sticky core and services inflation which stood at 6% and 6.9% respectively in March. Worrying as it may, inflation will continue to take the backseat for now as the focus is on reviving growth.”

“The numbers are slightly higher than expected. While food inflation remains high, non-food side inflation is a concern. Transport and communication is pushing the numbers high. Simultaneously, we have seen weaker-than-expected industrial production numbers.

“Growth will get precedence over inflation control. The monetary policy will continue to be accommodative. We don’t see any rate hikes in the current calendar at least and the liquidity is also likely to remain accommodative.”

“The CPI inflation for March that came exactly in line with our estimates reflects the bottoming-out of food prices and continued stickiness in core inflation. Over the next one quarter, we expect the headline print to average 5.3% despite supportive base effect.

Core inflation is expected to remain sticky despite a second wave of COVID-19 infections likely dampening demand, as Indian companies continue to witness a profit-led recovery amid reduced competition in the market place, weaker supply side responses in the face of higher commodity prices.”