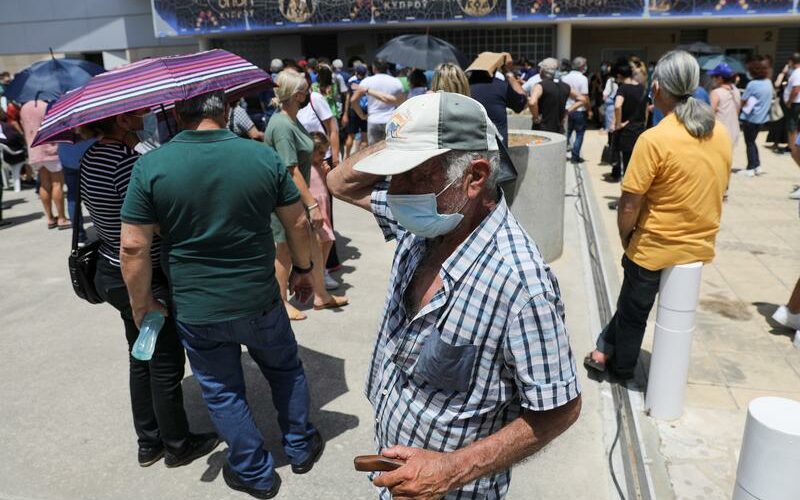 NICOSIA (Reuters) – Cyprus recommended on Wednesday that those under 50 should receive so-called messenger RNA (mRNA) COVID-19 vaccines, joining other countries like France who have set age restrictions for the AstraZeneca shot.

FILE PHOTO: People wait outside a vaccination centre, amid the coronavirus disease (COVID-19) pandemic in Limassol, Cyprus May 4, 2021. REUTERS/Yiannis Kourtoglou

The island state had previously no age restrictions for the AstraZeneca vaccine, which it has been using since January. The change follows reports of the death of a British woman administered the shot earlier this month in Cyprius.

The health ministry said it had referred the case to the European Medicines Agency (EMA). European drug regulators said last month there was a possible link between the vaccine and a very small number of cases of rare blood clots.

Individuals who have already taken a single-dose of the Vaxzeveria jab should receive their second dose, provided there were no serious side effects like thrombosis or thrombocytopenia, the ministry said in a statement, citing the “unanimous view” of scientific advisors.

A majority of those, it said, suggested that mRNA vaccines, technology used in the Pfizer-BioNtech and Moderna vaccines, be recommended for the under 50s.

AstraZeneca’s shot uses a harmless, weakened version of a chimpanzee common-cold virus to deliver instructions to generate an immune response and prevent infection.

Authorities had previously defended their decision not to impose age restrictions on the vaccine by saying people were offered a selection of shots and that they were following EMA guidelines.

But Cyprus had ordered considerably more AstraZeneca vaccines. With other options quickly running out, Vaxzevria was the only one available to thousands of people scrambling to book an appointment on a state-administered vaccine portal.

It had also made the AstraZeneca vaccine the only option available at private practitioners.

About 40% of Cyprus’s population has taken the first dose of a coronavirus vaccine, and 17% has had both doses.

28/05/2021 Markets Comments Off on In new advisory, Cyprus to give mRNA vaccines to those under 50
Markets