Workforce management startup Deputy has doubled in size since raising $111 million in funding last year but its founders are trying to ignore the hype of predictions it will be Australia's next tech unicorn.

"Being a unicorn, I don't think it should be anyone's focus, it's just an outcome of what happens," co-founder and chief executive Ashik Ahmed says. "Do people's lives get any better by being a unicorn?". 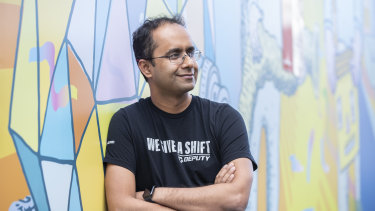 Ashik Ahmed co-founded Deputy which was valued around $423 million in its last capital raise. Credit:Louie Douvis

The speculation stems from Deputy's listing by CB Insights in February as one of 50 private companies around the world on a path to a $US1 billion ($1.4 billion) valuation alongside Airwallex which was subsequently valued at $US1 billion in March.

It's a prediction shared by Amanda Hjorring, chief operating officer of Deputy investor Square Peg Capital, who has previously described the startup as a genuine "unicorn contender".

Deputy is certainly growing quickly with the startup increasing its customers from 90,000 last year to 195,000 and hiring more than 100 new people bringing its workforce to around 360.

"We have significantly grown the business on every metric," Ahmed says. "It’s challenging dealing with growth."

It's been a rapid rise for Ahmed who started Deputy with his then-boss, Steve Shelley, 11 years ago after identifying an opportunity when working for Shelley's business Aerocare managing tasks like sick leave and salaries.

Until I came to Australia I had never seen a computer in my life and that was a key turning point for me as well.

The startup has taken off with Ahmed listed on the Australian Financial Review Young Rich List this year with an estimated wealth of $146 million based on Deputy's nominal valuation of $423 million.

"I wasn't keen on being part of that," Ahmed says. "But having said that, when the news happened I thought 'I can use that as an avenue for inspiring other people especially other migrants like myself'." 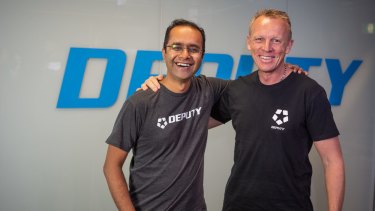 Ahmed moved to Australia from Bangladesh with his family in 1997, an experience he says was "very, very difficult".

"The difficulty probably was more for my parents coming from a middle-class background in Bangladesh but in Australia they couldn't get jobs," he says.

While Ahmed could read and write English he had limited experience speaking English and also had to deal with racism.

"It would be a lie if I said I didn't face it or see it," he says. "People might yell and say 'When are you going back to your own country?'. I ignored it and I saw the bigger path of what life has to offer me."

That path was based on an aptitude for technology.

"The big revelation for me was until I came to Australia I had never seen a computer in my life and that was a key turning point for me as well," he says.

Ahmed says the opportunities for Deputy's growth are huge with 60 per cent of the global working population paid hourly.

"I'm definitely not thinking of the next funding round or exit or initial public offering or anything like that," Ahmed says. "It's not what gets me out of bed. The reason we took funding was to ensure we could grow and make a bigger impact on the world. I still don't think I’m at 1 per cent of what Deputy could be so the journey continues." 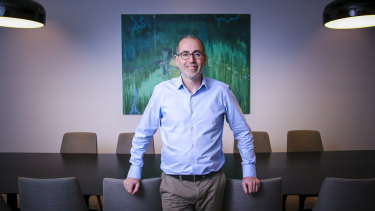 "In any other market opportunity like this there are lots of other people trying to solve the same problem and what Deputy has to do is do a better job than those other companies so they will adopt Deputy," he says. "We love the business and we love the market opportunity but more than that we really love Ashik and he is a pretty special founder."

02/12/2019 Markets Comments Off on ‘I don’t think it should be anyone’s focus’: Australian startup plays down unicorn hype
World News