New York (CNN Business)With less than three weeks until Election Day, President Trump is trailing Joe Biden in the polls. And an ETF whose ticker is the acronym for Trump’s famous campaign slogan is lagging the market, too.

The Point Bridge GOP Stock Tracker ETF (MAGA), which trades under the symbol MAGA, is down 8% this year — in sharp contrast to the benchmark S&P 500, which is up 7%.
Trump isn’t involved in the fund. Despite the cutesy ticker symbol, it isn’t designed to track Trump-friendly stocks or industries like oil giants, big banks and defense contractors.

Rather, Point Bridge — the investment firm that manages an index which the fund is based on — says it invests in 150 S&P 500 companies that have the highest number of workers and political action committees (PACs) that have donated to Republicans in the past two election cycles.
The fund has underperformed against the broader market since its September 2017 inception, up just 6.7% compared to the S&P’s 41.5% pop.

The MAGA ETF’s holdings are mostly equally weighted, with no individual stock accounting for more than 1% of its assets. Among the top 10 stocks in the MAGA ETF are home builder NVR (NVR), FedEx (FDX), Whirlpool (WHR) and General Electric (GE).
And there are also some surprising holdings in the fund, most notably Berkshire Hathaway (BRKB).
Warren Buffett endorsed Hillary Clinton against Trump in 2016. And while the Oracle of Omaha has not publicly endorsed any candidate this year, Biden said during a virtual campaign event this week that he recently spoke to Buffett about how America can lead the world.
CNN parent company AT&T (T) is also in the fund.

So why is the MAGA fund doing so poorly?
Hal Lambert, founder of Point Bridge Capital, noted to CNN Business in an interview that there aren’t many tech stocks in the MAGA ETF, as Silicon Valley firms tend to support more liberal/progressive/Democratic causes and candidates.
That means the fund has missed out on the Big Tech rally this year, while the S&P 500’s performance has been juiced by strong gains in megatechs Apple (AAPL), Amazon (AMZN), Microsoft (MSFT), Google owner Alphabet (GOOGL), Facebook (FB) and Netflix (NFLX). None of them are in the MAGA ETF.
The fact that the fund equally weights its stocks, as opposed to market cap weighting, only adds to the disparity.
“Tech has driven the market,” Lambert said.
Asked what will happen to the MAGA ETF if Trump loses, Lambert — who said he’s voting for Trump — did not rule out the possibility of launching a so-called Blue Wave ETF that focuses on companies donating to Democrats.
But he argues that a Biden victory could actually be a good thing for the MAGA ETF because disgruntled Republicans might invest more in it. And Lambert said the fund will keep the MAGA ticker even if Trump loses.
“The goal for this ETF was to have something for conservatives to invest in that hasn’t been out there,” Lambert said. 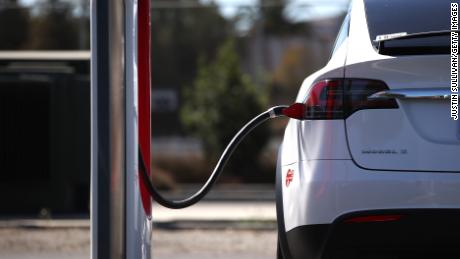 Still, the poor performance of the MAGA ETF might be a sign that politics and investing don’t mix well.
While the rise of so-called ESG funds could be viewed as a politically themed bet — since many Democrats support environmental, social/racial and corporate governance issues — the ESG movement isn’t specifically about political beliefs per se.
And other ETFs that focused on politics in recent years have done poorly as well.

For example, fund company EventShares shut down its Republican Polices and Democratic Policies funds in 2018, opting to combined them with a tax reform ETF to create a new fund called the U.S. Policy Alpha ETF.
That fund closed shop in August.
Source: Read Full Article

IMF: CBDCs give more control, but don’t solve every problem