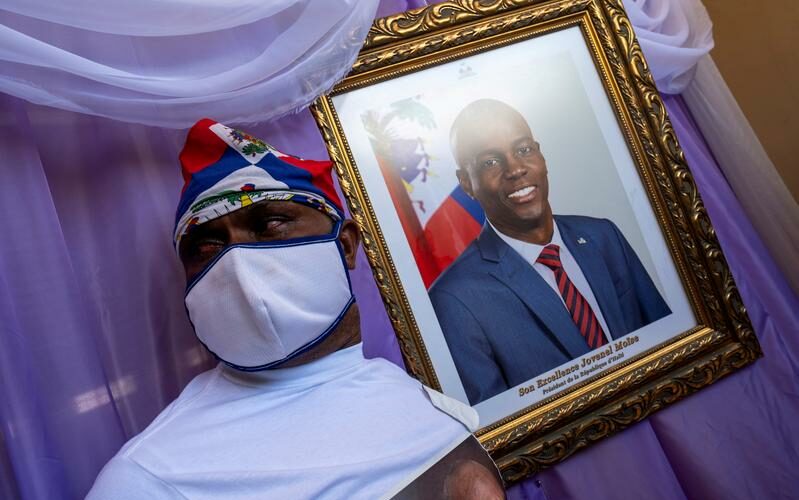 PORT-AU-PRINCE (Reuters) – Haitian President Jovenel Moise began this year by warning that his country was a land of coups, conspiracy and murder. In the days before he was shot dead in a murky international plot last month, he was telling friends that enemies were out to get him.

FILE PHOTO: A man stands next to a portrait of slain Haitian President Jovenel Moise placed on a memorial at the city hall in Cap-Haitien, Haiti July 22, 2021. REUTERS/Ricardo Arduengo/File Photo

“He told me a lot of people were spending a lot of money to murder him,” said a former Haitian senator and close friend of the late president, relating a conversation with Moise the evening of his death. “I told him to stop thinking like that.”

Showing Reuters his final text messages with Moise, the politician, who asked to remain anonymous out of concern for his safety, said the president did not identify the plotters.

More than a dozen officials, politicians, diplomats and relatives of Moise spoke to Reuters about the events surrounding his murder. The assassination decapitated a fragile government in a Caribbean country repeatedly convulsed by crisis – now exacerbated by a major earthquake on Aug. 14 – since the overthrow of the Duvalier family dictatorship in 1986.

The conversations painted the 53-year-old president as a man increasingly isolated and in peril toward the end of his life.

Moise supporters described his downfall as the inevitable consequence of a corrupt ruling elite closing ranks against a provincial outsider who dared to help Haiti’s majority poor.

“He was putting things in order. Here, when you put things in order, you die,” said Guy Francois, an ally who served as Moise’s minister of citizenship.

Critics, by contrast, cast Moise as a political novice who lacked the skills to build consensus, drifted towards autocracy and turned a blind eye to gang violence in areas hostile to his administration.

“He was a poor choice from the get-go,” said Salim Succar, a lawyer and onetime aide to Moise’s predecessor and former backer, ex-President Michel Martelly. “He never stood a chance.”

Many saw in his killing a microcosm of institutional rot in Haiti, where government has been hobbled by factional disputes, entrenched inequality, and a dependence on foreign powers still widely viewed as hostile to the country’s very foundation in 1804, when a slave revolt threw off the French colonial yoke.

In the rubbish-strewn center of Port-au-Prince, the government district is ringed by deserted streets now considered to be gang-controlled territory. Buildings battered by a 2010 earthquake that killed tens of thousands of people in the Western Hemisphere’s poorest country still scar the landscape.

Officials say Moise’s killers took advantage of the porous state of law and order to execute their plot at his personal residence in the Port-au-Prince suburb of Petion-Ville.

Moise’s bullet-ridden body was found in the early hours of July 7 after what the Haitian authorities said was an attack by a commando unit of mostly Colombian mercenaries. His wife, Martine, was injured. Police arrested some of the president’s security chiefs but have not identified the mastermind.

Some among the elite made no secret of their disdain for Moise, said one diplomat, recalling the “contempt” with which one of its number spoke of Moise at a private meeting.

Several business leaders have publicly condemned Moise’s murder. To date, 18 Colombians, some 20 Haitian police and a handful of other Haitian and Haitian-American suspects have been arrested.

Colombian officials familiar with the investigation say that most of the Colombians detained were probably victims of a plot within a plot to divert attention from the architects.

Only four of the Colombians knew about the conspiracy against Moise beforehand; most went to Haiti in the belief they would be bodyguards, said one Colombian official.

Because the commando unit faced no meaningful resistance until after his killing, investigators believe Moise was betrayed by his own security staff, the official added.

Moise’s friend, the former senator, said the president had known the Colombians were in Haiti and told him during their last phone call he was preparing to arrest the plotters.

Haiti was meant to elect a successor to Moise and a new parliament in September, but that date quickly began slipping towards November after his assassination.

After the latest earthquake that killed over 2,000 people and destroyed thousands of homes, holding any election this year looked “very difficult”, said Adriano Espaillat, a U.S. congressman originally from the neighboring Dominican Republic.

SHOCK, BUT NOT SURPRISE

Six months before his death, Moise seemed only too aware of the risks. On Jan. 1, he gave a speech to commemorate Haitian independence steeped in gloom.

“For 217 years, the whole history of the country has been based on conspiracies, coups, assassinations,” he said. “We conspire to destroy it, never to build it. More than 30 presidents overthrown or assassinated.”

Moise’s push to improve power supply at the expense of private interests and a constitutional reform that would have strengthened the presidency were cited by both allies and critics as key markers on his road to ruin.

But the problems started early.

Within months of taking office in February 2017, Moise’s administration was rocked by major street protests over tax hikes, then rising fuel prices.

A Senate report later accused Moise of embezzling funds from the Venezuela-backed PetroCaribe oil program, which he denied.

Protests worsened, and in 2019 Haiti fell into months of “Peyi lock”, or country lockdown, fueled by opposition-backed demonstrations. As political unrest, violence and kidnappings spread, calls for his resignation mounted.

Moise, who last year declared himself second only to God in Haiti, began ruling by decree in 2020 in the absence of a sitting parliament, and became increasingly confrontational.

In February, a month after his independence address, Moise said police had foiled a coup and an attempt on his life. A sense of foreboding among foreign officials deepened.

“Everyone was shocked” one diplomat said of his assassination. “But not many people were surprised.”

22/08/2021 Markets Comments Off on 'He never stood a chance': the fateful downfall of Haiti's president
Markets