No one will ever die wondering what Graeme Samuel really thinks. Courtesy of his Wednesday appearance before the House of Representatives Committee, his thoughts on the Australian Prudential Regulation Authority’s aversion to transparency are especially clear.

Samuel has a real problem with this financial regulator doing deals with the institutions it oversees, and is appalled that it allowed self-assessments done by 36 major financial institutions to remain private.

Part of his MO is using the microphone supplied by these kinds of forums to ram home his point and scare up a bit of action. 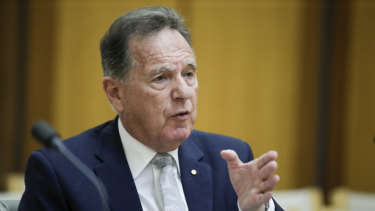 Graeme Samuel: Don’t cut deals with those you regulate.Credit:Alex Ellinghausen

His credentials have been honed by his position on the three-person panel that undertook the prudential inquiry into the Commonwealth Bank and more recently his leadership of the APRA capability review.

His desire is to threaten financial institutions that have not published their self-assessments with an external prudential CBA-style check, which could result in a degree of panic among the boards of many financial services companies.

'Not a threat. A reality check'

He told the parliamentary House Committee on Wednesday: "I thought to myself, wouldn't it be interesting to have a phone conversation to the chairman of those organisations and say 'by the way, we are preparing a shortlist of CBA-style inquiries and you can avoid all that by making your self assessment public'?"

Only Samuel doesn’t call it a threat – he calls it a reality check.

And he simply can’t understand why APRA agreed to a deal where companies would trade their co-operation for its discretion.

"That did not make much sense. That’s not the way regulators operate," Samuel – a former head of the Australian Competition and Consumer Commission – told the panel of parliamentarians.

Part of being a tough regulator is talking tough and following it up with reality.

He said that when he sat down individually with the chairman and executives from the banks, their lines of arguments were so similar it felt like they had been rehearsed around an Australian Banking Association board table.

According to Samuel, they all told him, "you must understand that our cooperation with APRA is dependent upon APRA not being transparent".

The chairman of one financial services company told Samuel that if the company felt that disclosure to APRA would lead to a referral to the Australian Securities and Investments Commission for prosecution, it would disclose less information.

Samuel said he and his fellow capability review panellists told APRA chair Wayne Byres that he shouldn’t need to do any trades with those he regulates – rather he should enforce transparency.

While he now believes that Byres is coming around to his way of thinking, clearly Samuel retains some reservations about the organisation’s ability to act on the recommendations made by the panel.

He was also clearly underwhelmed by the level of pushback from Byres in the days following the release of the capability review. Sufficiently underwhelmed that he was not prepared to give Byres his wholehearted endorsement.

He was asked on Wednesday whether he had confidence in APRA and its management being able to adjust and implement the reforms necessary.

"I don’t want to give a direct answer to that because it might come back and bite me in a year’s time," he replied.

He said APRA knows what it has to do and reckons the review panel provided it with the tools.

The recommendations are "powerful tools, sharp spears and when you push back and say that they [the recommendations] are difficult to do [and] I don’t think I can do them, what you are really doing is breaking the heads off the spears and waving around a limp stick instead", Samuel said.

"Part of being a tough regulator is talking tough and following it up with reality," he explained.

"Byers now realises that is fundamental to what they have to do. Now we will see how the reality turns out."

September 11, 2019 Markets Comments Off on Graeme Samuel’s view on APRA’s management? ‘Ask me in a year’
World News