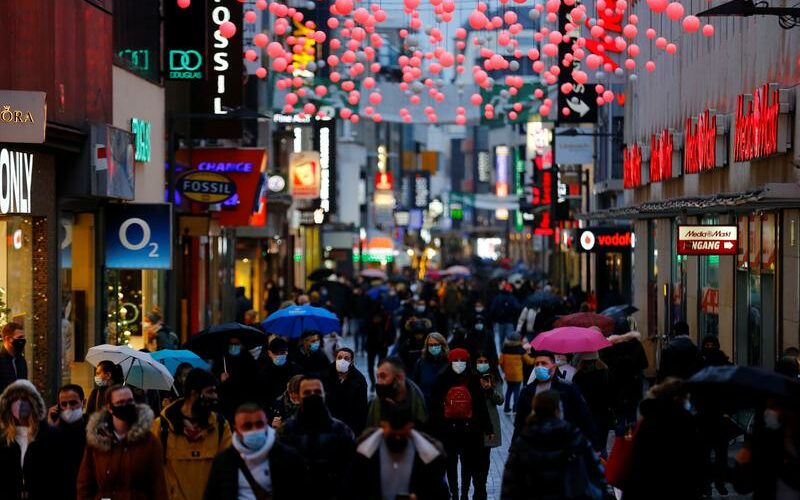 FILE PHOTO: Shoppers walk down Hohe Strasse shopping district one day before Germany goes back to a complete lockdown due to the coronavirus disease (COVID-19) outbreak, in Cologne, Germany, December 15, 2020. REUTERS/Thilo Schmuelgen

BERLIN (Reuters) – Germany’s annual consumer price inflation accelerated in May, advancing further above the European Central Bank’s target of close to but below 2%, the Federal Statistics Office said on Monday.

Consumer prices, harmonised to make them comparable with inflation data from other European Union countries, rose by 2.4% in May, up from 2.1% in April. A Reuters forecast had pointed to a May reading of 2.5%.

The ECB’s chief economist, Philip Lane, said earlier this month the bank had a “lot of work to do” to raise inflation back to its 2% goal and market talk of rapidly rising prices is misplaced.

Euro zone inflation is approaching 2%, its fastest rate in years, on the back of fiscal support and the unwinding of last year’s oil price crash, prompting some commentators to predict a new era of inflation.

But Lane pushed back on this narrative, arguing that the labour market will take years to get back to its pre-crisis level, corporate balance sheets are depleted and the economic rebound is still predicated on copious central bank and government support.

The ECB will next meet on June 10 and must decide whether to ease up on its stimulus given the prospect of rapid growth over the rest of the year as economic restrictions are lifted and the services sector rebounds.

“The ECB is unlikely to be disturbed by the short-term fluctuations in the inflation rate and will only slowly return its policy to normal,” Holger Schmieding, chief economist at Berenberg Bank, said.