London (CNN Business)Investors had hoped to celebrate the moment US lawmakers agreed on a new stimulus package to help America’s ailing economy. Instead, the emergence of a new variant of the Covid-19 virus in the United Kingdom has sent markets plunging, as anxiety about the pandemic again comes to the fore.

What’s happening: Over the weekend, the United Kingdom reversed plans to loosen restrictions over Christmas and announced strict lockdowns across much of the country, citing concerns about a variant of the coronavirus believed to be much more infectious. In the past 24 hours, the country has become increasingly isolated, with Canada, France and Israel among those banning UK travelers while they assess the situation.
S&P 500 futures were 1.6% lower as of 7:15 a.m. ET. Dow futures were down 1.3%, or more than 400 points, while Nasdaq futures were off 0.9%.

The FTSE 100 (UKX) in London was down more than 2%. France’s CAC 40 (CAC40) was off 2.6%, and Germany’s Dax (DAX) dropped 2.7%. Airline and hospitality stocks were among those hit hard, with shares of EasyJet (ESYJY) and British Airways owner IAG both down 9%.
“Only masochists or the blindly ambitious look forward to early Monday wake-up calls, but that’s what is being delivered to financial markets,” Oanda market analyst Jeffrey Halley told clients.

The virus developments overshadowed a long-awaited breakthrough in US stimulus talks. Congressional leaders announced Sunday night that they’d secured a deal for a $900 billion rescue package to deliver much-needed relief for small businesses, unemployed Americans and health care workers.
The package is expected to include a $600 direct payment for Americans under a certain income level, as well as $300 per week in enhanced unemployment insurance benefits.
But good news out of Washington is already taking the back seat.
“It is insufficient to alleviate the UK situation and immediate negative [sentiment],” said Stephen Innes, chief global markets strategist at Axi.
Remember: Wall Street had been focused on the rollout of vaccines and hopes for an economic boom as life begins to return to normal by summer 2021, sending stocks to all-time highs as recently as last week.
“A lot of the consensus thinking out there can be summarized as: ‘What’s to fear? Everything should be better from here,'” David Bianco, chief investment strategist for the Americas at DWS, told me last week.
But analysts including Bianco noted that near-term market turbulence could surface during a difficult winter. The question now is whether Monday’s selloff is a blip, or if the new variant will meaningfully shift the mood for a market that’s been entirely focused on the positive lately.

Tesla (TSLA) officially joins the S&P 500 on Monday, capping a spectacular year for a stock that’s had plenty of doubters. 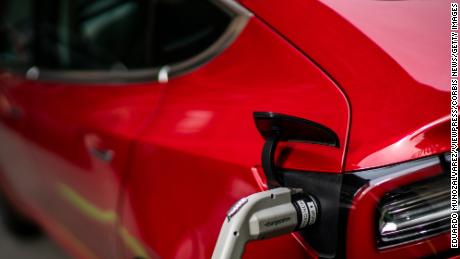 The latest: Shares closed Friday at $695, having jumped more than 730% since the beginning of 2020.
Part of that rally has been driven by enthusiasm that the electric car maker is entering one of the world’s most important and closely-watched indexes. Inclusion in the S&P 500 means fund managers that previously held out now have no choice but to add Tesla to their portfolios.
Tesla — which is due to make up 1.69% of the index — will instantly become its top-performing stock, per my CNN Business colleague Paul R. La Monica. And it’s not even close.
The second-best performer, Etsy, which joined the index in September, has rallied 330% in 2020.
Watch this space: Wall Street analysts are becoming increasingly worried that Tesla’s share price has become divorced from reality.
“Tesla shares are in our view and by virtually every conventional metric not only overvalued, but dramatically so,” JPMorgan warned clients earlier this month.
Last week, CFRA downgraded its Tesla rating from “strong buy” to “hold,” noting that the flurry of buying tied to S&P 500 inclusion will soon subside.
“We think future growth expectations are now appropriately bullish and after a multi-quarter run of positive news, we struggle to identify the next catalyst in the story,” analyst Garrett Nelson said.

The US government has been rattled by a cyberattack that led to data breaches at several federal agencies, including the Department of Commerce and the Department of Energy.
But the attack on SolarWinds, a firm that wasn’t previously a household name, has also put many top corporations on edge, my CNN Business colleague Rishi Iyengar reports.
The details: SolarWinds said in an investor filing that as many as 18,000 of its customers may have been running software containing the vulnerability that allowed the hackers to penetrate the Commerce Department. US officials suspect Russian-linked hackers are behind the breach.
SolarWinds provides services to more than 425 companies in the Fortune 500, according to a page since removed from its website. Firms listed include Cisco, CNN parent AT&T, Microsoft, Comcast, Visa and Mastercard. A number of these firms told CNN Business that they’re conducting investigations. At least two say they’ve been affected to some degree.
“Like other SolarWinds customers, we have been actively looking for indicators of this actor and can confirm that we detected malicious SolarWinds binaries in our environment, which we isolated and removed,” a Microsoft spokesperson said in a statement, adding that the company had not found evidence that its services or customer data were accessed. “Our investigations, which are ongoing, have found absolutely no indications that our systems were used to attack others.”
Kiersten Todt, a former cybersecurity official in the Obama administration, told CNN Business that “every organization [and] company should be concerned.”
“Companies will need to do clean-up similar to a hurricane,” she said. “It is going to be expensive and extensive. Companies are going to have to identify what has been breached and what, if anything, remained stable.”

Attention will be focused on the virus and Tesla during a tumultuous start to the holiday week.
Coming tomorrow: US consumer confidence data for December will take the pulse of the American shopper as the pandemic gathers steam.
Source: Read Full Article