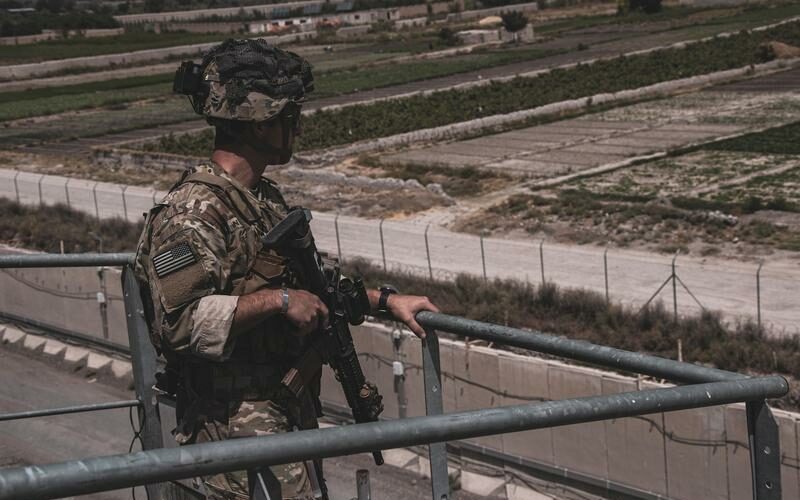 KABUL/WASHINGTON (Reuters) -A firefight erupted at Kabul airport on Monday when Afghan guards exchanged fire with unidentified gunmen and one guard was killed during the clash, which involved U.S. and German soldiers, Germany’s military said.

Thousands of Afghans and foreigners have been thronging the airport for days, hoping to catch a flight out after Taliban fighters captured Kabul on Aug. 15.

Twenty people have been killed in the chaos at the airport, most in shootings and stampedes, as U.S. and international forces try to evacuate citizens and vulnerable Afghans.

CNN said the clash began when a sniper outside the airport fired at Afghan guards, who are mostly former government soldiers helping U.S. forces, near the airport’s north gate.

U.S. and German forces were involved in the clash, Germany’s military said. Three Afghan guards were being treated at a field hospital in the airport, it said.

Two NATO officials at the airport said the situation was under control after the firing.

The Taliban have deployed fighters outside the airport, where they have tried to help enforce some kind of order.

On Sunday, Taliban fighters beat back crowds at the airport a day after seven Afghans were killed here in a crush at the gates as the deadline for the withdrawal of foreign troops approaches.

Foreign forces in Afghanistan have not sought to extend the Aug. 31 deadline to leave, a Taliban leadership official said, adding it would not be extended, after President Joe Biden said U.S. troops might stay longer to oversee a “hard and painful” evacuation.

The Taliban seized power just over a week ago as the United States and its allies withdrew troops after a 20-year war launched in the weeks after the Sept. 11, 2001, attacks as U.S. forces hunted al Qaeda leaders and sought to punish their Taliban hosts.

The administration of Biden’s predecessor, Donald Trump, struck a deal with the Taliban last year allowing the United Sates to withdraw its forces in exchange for Taliban security guarantees.

Biden said on Sunday the security situation in Afghanistan was changing rapidly and remained dangerous.

“Let me be clear, the evacuation of thousands from Kabul is going to be hard and painful” and would have been “no matter when it began”, Biden said in a briefing at the White House.

“We have a long way to go and a lot could still go wrong.”

Biden said he had directed the State Department to contact stranded Americans.

“We’re executing a plan to move groups of these Americans to safety and to safely and effectively move them to the airport compound … I will say again today what I’ve said before: Any American who wants to get home will get home.”

British Prime Minister Boris Johnson will urge Biden here this week to extend the evacuation deadline from Afghanistan, but even if one is agreed, the West will also need the approval of the Taliban, a British defence official said.

Panicked Afghans have clamoured to board flights out of Kabul, fearing reprisals and a return to a harsh version of Islamic law that the Sunni Muslim group implemented when it held power.

The United States on Sunday sought the help of six commercial airlines here to transport people after their evacuation from Afghanistan. Biden said people fleeing Afghanistan were being assisted by more than two dozen countries in four continents.

A U.N. flight took 120 people from Kabul to Kazakhstan on Sunday, a U.N. spokesman said. Passengers included U.N. personnel and members of non-governmental organizations who work with the United Nations in Afghanistan, he said, adding that it was the second such flight in a week.

Leaders of the Taliban, who have sought to show a more moderate face since capturing Kabul, have begun talks on forming a government, while their forces focus on the last pockets of opposition.

Taliban fighters had re-taken three districts in the northern province of Baghlan which opposition forces briefly captured and had surrounded opposition forces in the Panjshir valley, an old stronghold of Taliban opponents northeast of Kabul.

“The enemy is under siege in Panjshir,” Taliban spokesman Zabihullah Mujahid said on Twitter.

Anti-Taliban leader Ahmad Massoud here said on Sunday he hoped to hold talks with the Taliban but his forces in Panjshir – remnants of army units, special forces and militiamen – were ready to fight.

Mujahid, also said the Taliban wanted to “solve the problem through talks”.

Reuters spoke to eight doctors in hospitals in several cities who said they had not heard of any violence or received any casualties from clashes since Thursday.