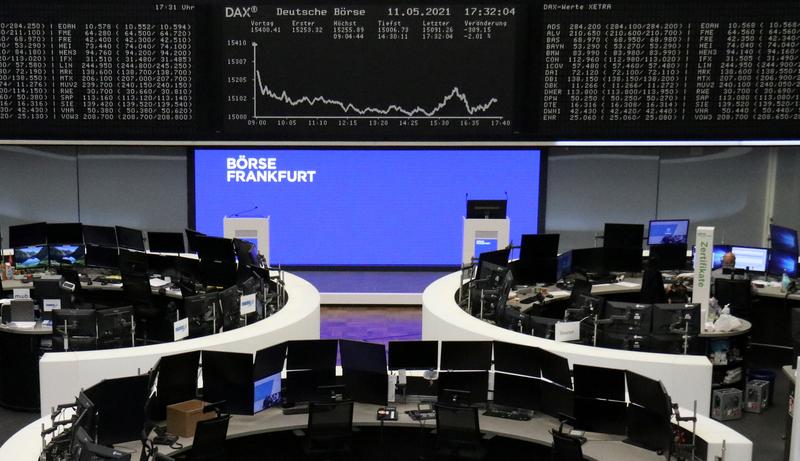 (Reuters) -European stocks edged higher on Friday, but were on course for their biggest weekly drop since February-end as investors maintained a cautious stance amid U.S. inflation scare.

FILE PHOTO: The German share price index DAX graph is pictured at the stock exchange in Frankfurt, Germany, May 11, 2021.REUTERS/Staff

The pan-European STOXX 600 index rose 0.3%, with banks and retail stocks leading the gains.

The benchmark was on course for a 1.4% weekly drop as a rally in commodity prices and signs of quickening U.S. inflation raised fears about an earlier-than-expected interest rate hike by the U.S. Federal Reserve.

Investors will be watching U.S. retail sales and industrial production data due later in the day to gauge whether the inflationary pressures are short-lived, as seen by Fed policymakers.

“Either the U.S. inflation uptick is temporary, or the Fed is dangerously complacent. Either way, we’re going to see tolerance of higher inflation tested further in the months ahead,” Kit Juckes, a strategist at Societe Generale wrote in a note.

Bank of America’s weekly fund flow statistics showed that investors pulled out of tech equity funds and loaded up on inflation protection in the week ended May 12.

While price rises are less of a problem in the euro zone, investors will be watching the European Central Bank’s minutes of its latest policy meeting, to be released later in the day, to get clues on the tapering of its bond purchase scheme.

Among individual stocks, Italy’s Banco BPM rose 2.4% after Deutsche Bank upgraded the stock to “buy”, saying the lender’s “speculative appeal” could increase in the next few months.

Atlantia slipped 1.8% after the Italian infrastructure group reported a net loss in the first quarter and confirmed it would decide on the sale of its stake in motorway unit Autostrade by June 11.