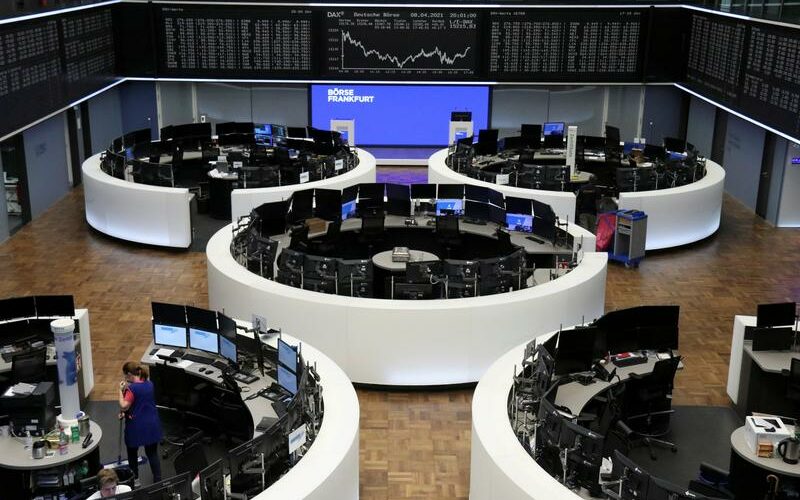 (Reuters) -European stocks were subdued on Friday, but on course for their longest weekly winning streak since November 2019 as hopes of a rapid recovery in economic growth offset doubts over the euro zone’s COVID-19 vaccination programme.

The pan-European STOXX 600 index was flat after hitting an all-time high at the open, while UK’s blue-chip FTSE 100 and Germany’s DAX slipped 0.4% and 0.2%, respectively.

Global sentiment was underpinned by the U.S. Federal Reserve’s pledge to keep its super-easy policy in place even as data showed the world’s largest economy kicking into higher gear.

London equities have outperformed this week, with the domestically focussed FTSE mid-cap index notching a record high as Britain gradually emerges from a strict winter lockdown.

“While the UK and US have done relatively well on the vaccination roll-out, continental Europe has lagged,” said Dhaval Joshi, chief strategist at BCA Research.

“But they will sort it out later this year. You’ll see an early rebound in UK and US economies from Q2 onwards. In continental Europe, it will be later this year rather than Q2.”

European stocks hit a series of all-time highs this week, despite setbacks on the vaccination front after European regulators found a potential link between AstraZeneca’s COVID-19 vaccine and reports of rare brain blood clots.

Investors will shift their focus to the U.S. earnings season next week, with profits at S&P 500 companies expected to jump 25% in the first quarter, according to Refinitiv IBES estimate.

Holiday company TUI fell 7.3% after it said it was raising 350 million euros ($416.33 million) through an issuance of convertible bonds to bolster its finances and repay debt.

British American Tobacco dropped 2.2%, among the biggest drags on STOXX 600, after J.P. Morgan downgraded the stock to “neutral”.