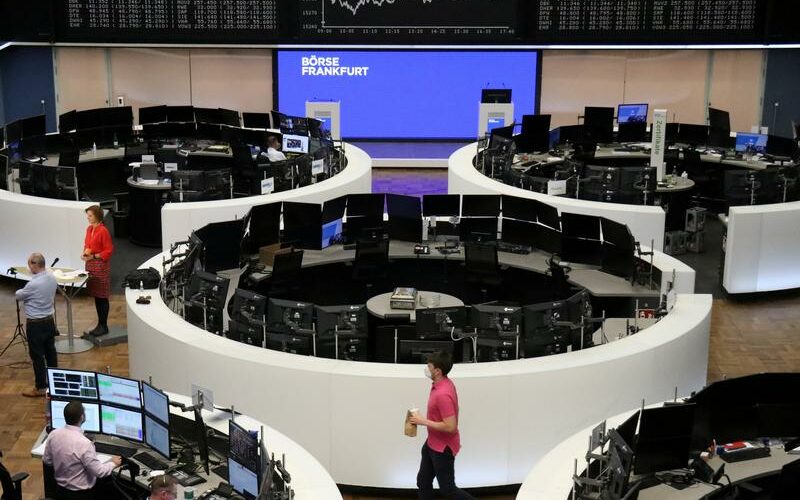 (Reuters) – European stocks dipped on Thursday, weighed down by a fall in heavyweight miners after commodity prices tumbled, while a rapid rise in U.S. inflation kept risk sentiment at bay.

The pan-European STOXX 600 index edged down 0.1%, after falling as much as 1.7% earlier in the session, drifting further away from an all-time high.

Basic resources fell 3.0%, leading declines among European sectors, while oil and gas slipped 1.4%. The sectors were among recent market leaders on the back of a surge in commodity prices. [MET/L] [O/R]

“At one point today European markets were down heavily… inflation concerns once again weighed on sentiment, however these lows proved to be short-lived, with the rest of the day spent clawing the bulk, or all of the losses back,” said Michael Hewson, chief market analyst at CMC Markets in London.

European stocks have rallied to all-time highs this month, with the STOXX 600 up almost 9.5% so far this year as economic recovery prospects and strong earnings drew buyers of equities.

British luxury brand Burberry tumbled 4.2% on reporting a 10% drop in annual sales, weighed down by the COVID-19 pandemic.

UK’s biggest broadband and mobile provider, BT Group, fell 5.9% as it reported a 7% decline in revenue and a 6% drop in adjusted earnings for the full year.

In another disappointing London stock market debut, shares of Canadian chip company Alphawave plunged by as much as 21%.

British engineering company Rolls-Royce fell nearly 6%, as it stuck to its guidance to turn free cash flow positive at some point during the second half of 2021.

Markets in Denmark, Finland, Norway, Sweden and Switzerland were closed for public holiday.