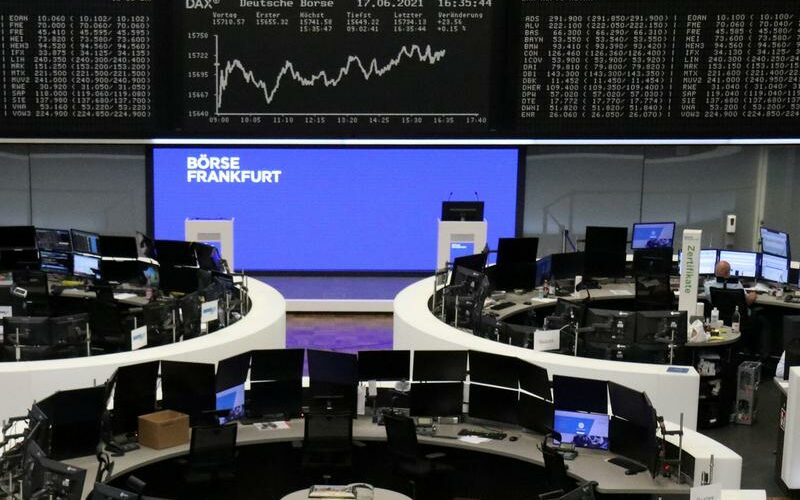 (Reuters) -A slide in bank and energy stocks hit European shares on Friday, with a hawkish policy outlook from the U.S. Federal Reserve also casting a dampener on the STOXX 600’s fifth straight weekly gain.

The banking index, which typically does well when interest rates are high, fell 1.2% to track an overnight slump in its U.S. peer, as investors booked profits after steady gains in the sector this year. [.N]

Insurers, telecom stocks and energy stocks lost between 0.8% and 1.2%, while industrials and real estate stocks were among the biggest gainers.

“The market has been polarised in certain positions,” said Andrea Cicione, head of strategy at TS Lombard.

The STOXX 600 recently scaled record highs on assurances from the European Central Bank that it would keep monetary policy loose, but unexpected signals from the Fed around tapering its massive stimulus dented demand for risky equities this week.

If the European benchmark index had ended higher on Thursday, it would have marked its longest gaining streak in nearly 15 years.

Germany’s DAX index fell 0.3% as data showed a bigger-than-expected jump in May producer prices. But German bond yields edged lower, with analysts expecting the adverse reaction of euro zone bond prices to the Fed to be short-lived.

Switzerland’s blue-chip stock index SMI rose 0.4% to hit an all-time high and was on course for its 14th straight days of gains.

The European mining index slipped 0.1%, bringing its weekly decline to more than 5% due to lower metal prices. [MET/L]

Danish pharmaceutical company Orphazyme sank 60.1% after saying it had failed to win support from the U.S. Food and Drug Administration for its arimoclomol drug, a treatment designed for genetic disorder Niemann-Pick disease type C.