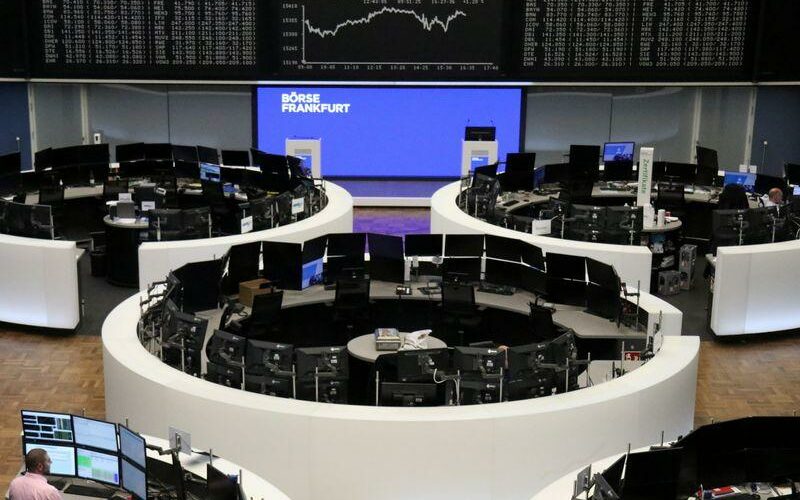 LONDON (Reuters) – World stocks were spiralling towards their worst week of the year on Thursday, as a bigger-than-expected rise in U.S. inflation worried bond markets and as red-hot metals, crop and cryptocurrency prices all suffered sudden stops.

For traders the only place to take refuge was the U.S. dollar.

Asia had taken a post-Wall Street pounding, London’s FTSE was down 2% before lunch, bond, commodity and U.S. futures markets were all deep red and Elon Musk and Tesla were no longer accepting bitcoin. [.EU][.N][MET/]

While there were plenty of idiosyncrasies, the overarching worry was rising inflation pressures in the United States might force the Federal Reserve to start turning off its cheap money that has been driving markets rapidly higher.

Basic resources and oil and gas sectors, among the recent top gainers on the back of a surge in commodity prices, fell over 2% as oil prices slumped nearly 2.5% in their worst day in six weeks. [O/R]

“Inflation pressures are going to be rising, and they’re not going to be temporary,” said Jeremy Gatto, investment manager at Unigestion. “What does that mean? Effectively that (interest) rates will be rising.”

The MSCI world equity index, which includes 50 countries, fell 0.6% and was on course for its fourth straight day of losses and weekly fall of nearly 4%, which would be its worst since last October.

Wall Street futures were 0.4% down after being blindsided on Wednesday when data showed U.S. consumer prices jumped by the most in nearly 12 years in April. It showed booming demand amid a reopening economy meeting equally powerful supply constraints both in the U.S. and abroad.

The jump, which sparked the S&P 500’s worst one-day drop since February, was largely due to outsized increases in airfares, used cars and lodging costs, all driven by the pandemic and likely to prove transitory.

Fed officials were quick to play down the impact of one month’s numbers, with vice chair Richard Clarida saying stimulus would still be needed for “some time” but traders weren’t wholly convinced.

Yields on 10-year Treasuries were at 1.68%, having climbed 7 basis points overnight in the biggest daily rise in two months. Germany’s sub-zero 10-year yield, which is Europe’s benchmark, was its closest to positive territory since May 2019. [GVD/EUR]

“As to the (global market) slide today, I think really it’s highlighting how uncomfortable investors are in assessing the new mandates for the Fed. They still don’t fully understand when the Fed would move.”

As major economies reopen more fully from COVID-19 lockdowns, many investors expect higher levels of inflation to stoke volatility in equities markets through the year.

“This year is going to be a big battle between the bullishness of mass reopening/stimulus on one hand and the inflationary consequences on the other,” Deutsche bank analysts wrote. “Expect regular pockets of vol.”

Investors have now priced in a roughly 80% chance of a Fed rate hike as early as December next year, though it has provided a shot in the arm for the dollar which is under pressure from rapidly expanding U.S. budget and trade deficits.

For the cryptonites, there was a chink of light as bitcoin steadied at $50,830 after a 13% drop when Elon Musk had said Tesla would stop accepting it as payment because of the amount of fossil fuels that go into bitcoin ‘mining’.

Bitcoin is created when high-powered computers compete against other machines to solve complex mathematical puzzles. At current rates the process is estimated to devour about the same amount of energy annually as the Netherlands did in 2019.

Ether, the world’s second-largest cryptocurrency, couldn’t match bitcoin though, dropping 2.3% to $3,735. Metals and crops were also wilting. Copper dropped 1.6% having hit a record high earlier in the week while corn, wheat, sugar dropped between 1%-2%. [MET/L]