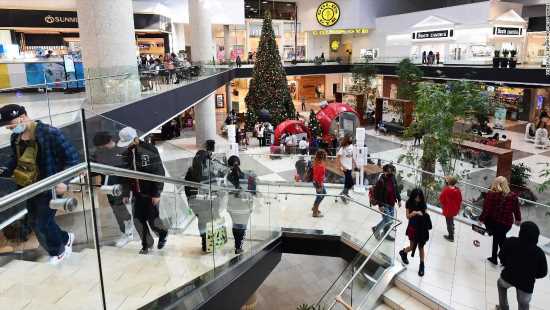 What’s happening: Despite a sluggish start, US retail sales rose 8.5% year-over-year between Nov. 1 and Dec. 24, according to a new report from Mastercard (MA). An uptick in clothing sales, in particular, helped drive the spending surge.
“Consumers splurged throughout the season, with apparel and department stores experiencing strong growth as shoppers sought to put their best dressed foot forward,” Steve Sadove, senior advisor for Mastercard, said in a statement.

The report, published over the weekend, includes three big takeaways about the state of the retail industry.

Early shopping: US retail sales grew by 0.3% in November, a sharp decline from the previous month and less than economists had predicted. But that data may have looked weak because so many more people shopped in October, when sales jumped 1.8%.

Mastercard found that consumers had no problem pulling out their wallets earlier than usual as they tried to avoid delayed shipments and product shortages and took advantage of special promotions. Between Oct. 11 and Dec. 24, total retail sales rose 8.6% compared to last year.
Foot traffic is up: Labor shortages and fears about shipping delays hung over Black Friday. But it remained the biggest day of the holiday shopping season, Mastercard found. Over Thanksgiving weekend, US retail sales rose 14.1% year-over-year.
Shopping in person played a major role as Americans showed comfort browsing again. In-store sales over Thanksgiving weekend jumped 16.5% compared to 2020. Over the entire holiday period, they rose 8.1% compared to 2020 and 2.4% compared to 2019.
Online shopping grows: Still, e-commerce continues to grab a bigger slice of the pie. Online sales grew 11% compared to the same period last year, despite a mixed Cyber Monday.
Online shopping accounted for 20.9% of total sales over the holidays. That’s an increase from 20.6% in 2020 and 14.6% in 2019.
So why did the all-important holiday season manage to be merry for retailers, despite plenty of curveballs?
In spite rising prices, Americans were eager to spend the extra money they’d pocketed over the course of the pandemic. Stimulus checks and child tax credit payments for tens of millions of families have boosted incomes this year and eased financial strain.
That’s contributed to a gap between how consumers say they feel about the economy and how they’re actually behaving.
A buoyant stock market that lifts confidence and wage increases have also propped up sentiment in the face of inflation anxiety.
Yet economists and investors are closely watching what happens to shopping patterns as pandemic-era savings are used up and lingering inflation forces some families to make tough choices.
A survey by Gallup published in early December found that 45% of American households report that inflation is “causing their family some degree of financial hardship.”
Unsurprisingly, lower-income households are the most affected. Of those earning less than $40,000 a year, 71% said recent price increases have caused hardship. For middle-income households, that figure was 47%. It fell further to 29% for households making $100,000 a year or more.

Hundreds of canceled flights are scrambling holiday travel during one of the busiest times of the year.
The latest: Major US airlines slashed hundreds more flights Sunday, the third day in a row of mass cancellations and delays over Christmas weekend, as staff and crew called out sick amid the Omicron surge.
The problems don’t appear to be easing just yet. So far, more than 2,000 flights have been canceled globally on Monday.
The big issue: United Airlines (UAL) blamed the Omicron variant for some of its operating snags.
“The nationwide spike in Omicron cases … has had a direct impact on our flight crews and the people who run our operation,” the company said in a memo last week obtained by CNN.
Investor insight: Shares of Delta Air Lines (DAL), the biggest US carrier, are down 1.7% in premarket trading on Monday, as are shares of American Airlines (AAL). United’s stock is off almost 2%.
Turbulence over the holidays may not be short-lived.
German carrier Lufthansa recently said it’s had to cancel 10% of its winter flight schedule as the pandemic weighs on demand, citing “a sharp drop in bookings.” That doesn’t bode well for the weeks to come.

Meet the CNN Business CEO of the Year

The Covid-19 pandemic is far from over. But around the world this year, life returned to something that resembled “normal” for many people — and for that, we can thank vaccines.
That’s the main reason CNN Business has picked Pfizer’s Albert Bourla as its CEO of the Year.
Breaking it down: My colleague Paul R. La Monica also considered Lisa Su of AMD, Ford’s Jim Farley, Marvin Ellison of Lowe’s, David Solomon of Goldman Sachs, Alphabet’s Sundar Pichai and yes, Elon Musk, the Tesla (TSLA) chief who was named Person of the Year by Time magazine.
But Bourla was the final choice. Global vaccination campaigns powered a huge economic rebound in 2021 on the heels of last year’s historic contraction.
The International Monetary Fund predicted in October that the global economy would grow 5.9% this year after shrinking 3.1% in 2020. That’s in large part due to shots like Pfizer’s, which restored consumer confidence and allowed governments to lift restrictions.
“Pfizer did a lot of good [for] humanity, and we are very, very proud of it,” Bourla told CNN Business. “Not only were we able to save so many lives … but we are enjoying high levels of corporate reputation right now. People like us.”
Looking ahead: Pfizer has also developed a pill shown to drastically reduce the risk of hospitalization and death for people who contract the coronavirus. It was recently awarded emergency approval in the United States, paving the way for widespread distribution in 2022. Bourla also said Pfizer is already developing a shot aimed at Omicron, which he believes could be tested and submitted to regulators by March.
Bourla joins previous winners Marc Benioff of Salesforce (CRM), Brian Cornell from Target (TGT)and Chipotle’s Brian Niccol.

It’s the week between Christmas and New Year’s, and many of you are reading this from the couch. You can go sneak a nap: No major economic data or earnings reports are coming later today.
Coming tomorrow: The FHFA Housing Price Index and the S&P Case-Shiller Home Price Index both post on Tuesday.
Source: Read Full Article