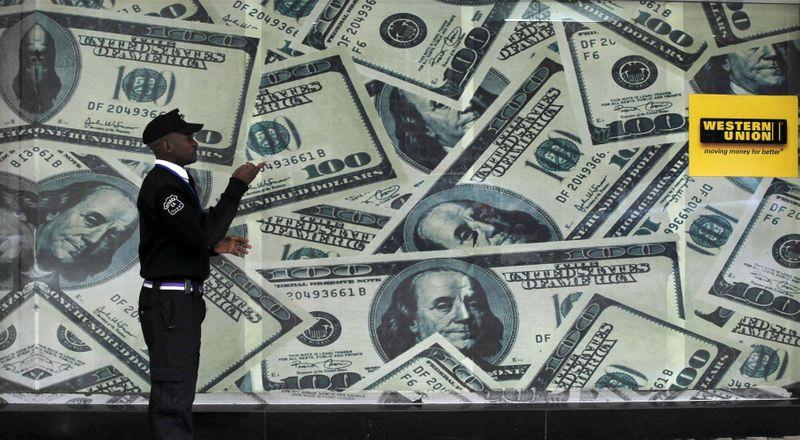 LONDON (Reuters) – The dollar held its ground against major peers on Monday as disappointing monthly activity data from China helped the greenback claw back some losses after a shocking slump in consumer sentiment on Friday weakened the U.S. unit.

Against a basket of other currencies, the greenback broadly steadied at 92.53 after falling to a one-week low of 92.468 on Friday. Its gains were the most pronounced against the Chinese yuan and the Australian dollar, against which it advanced 0.1% and 0.5% respectively.

July retail sales, industrial production and fixed asset investment were all weaker than expected as the latest COVID-19 outbreak weighed on the world’s second-biggest economy.

But long positions on the greenback swelled to their biggest levels since March 2020 suggesting the move lower was more a temporary setback than the beginning of a structural downtrend.

The release of the Fed minutes this week will be key to the short-term outlook for the greenback especially if it confirms more policymakers are leaning towards tapering its bond purchase plan by the end of the year.

MUFG strategists noted there has been a clear pattern for the U.S. dollar to strengthen modestly after the release of Fed minutes but there is the risk of a bigger market reaction when the Fed’s policy is moving closer to a pivot point.

“It poses the main event risk of disrupting the quiet period of trading we have seen over the summer period,” they said.

Currency market volatility, even by its already low levels, is nearing 2021 lows thanks to the summer lull.

Elsewhere, minutes from the Reserve Bank of Australia’s latest meeting are due on Tuesday.

The kiwi dollar was 0.21% weaker at $0.70235 ahead of the Reserve Bank of New Zealand’s policy meeting on Wednesday, at which economists widely expect the first hike in the benchmark interest rate since 2014.

In cryptocurrencies, bitcoin edged higher to around $47,500, approaching the three-month high of $48,190 marked over the weekend.