The charge takes the total for CYBG's provision for possible PPI liabilities to more than more than £380 million since March, 2018. 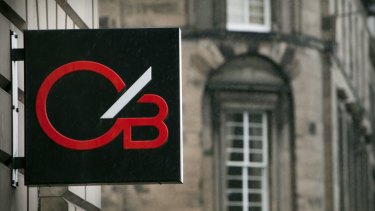 CYBG reported a statutory profit before tax of just £42 million on revenue of £843 million in the six months ended March 31.Credit:Bloomberg

CYBG reported a statutory profit before tax of just £29 million on revenue of £843 million in the six months ended March 31, compared with a loss of £95 million in the first half of 2018.

The group incurred acquisition and integration costs of £214 million during the period, mostly from the impact of costs associated with its acquisition of Virgin Money.

CYBG completed its £1.7 billion acquisition of Virgin Money in October 2018.

Despite a series of large provisions for PPI liabilities, James Hayward, chief executive of litigation specialists RGL Management, said they might not be enough.

On May 1, RGL Management formally started UK a class action in the High Court against Clydesdale Bank and NAB in relation to tailored business loans that gave rise to allegations of deceit, misrepresentation, negligent misstatement, breach of contract and unjust enrichment.

RGL said in a statement the class action consists of almost 2000 claimants and "continues to grow."

"The direct losses sought will amount to hundreds of millions of pounds, and the addition of consequential losses will make this value considerably higher," it said.

Mr Hayward said: "As we prepare to bring further waves of claims, and with more people joining the action every day, the bank would do well to realise that this is not something which is going to go away."

He said RGL was yet to receive a full public response from CYBG and NAB to the claims.

"I look forward to hearing their explanation for what are a set of very serious allegations indeed," he said.

Who needs native exchange tokens in 2020?

Cardano and Ethereum Price Surge Alongside Bitcoin — Will XLM Follow?

Analysts Foresee a Harsh End to Bitcoin’s Uptrend if It Losses $9,350

HBO Max So Far Merits A Grade Of C+ As “An Opportunity Lost,” Analysts Say