President Trump comments on the stock market reaching historic highs and the passage of USMCA while recognizing the LSU Tigers for their national championship victory.

Speaking to reporters ahead of parliament's return on Monday, Trudeau said Canada would immediately move forward on ratifying the trilateral trade pact, known as USMCA, with the United States and Mexico.

"Passing the new NAFTA in parliament is our priority,'' Trudeau said while flanked by members of his cabinet following a three-day retreat. He noted millions of Canadians depend on stable, reliable trade.

TRADE DEALS POSITION US FARMERS FOR 'RECORD YEAR OF EXPORTS': US AGRICULTURE SECRETARY

Canada is the last country to ratify the revamp of the 26-year-old North American Free Trade Agreement (NAFTA) that includes tougher rules on labor and automotive content. The deal cannot take effect until it has been ratified by all three member nations. 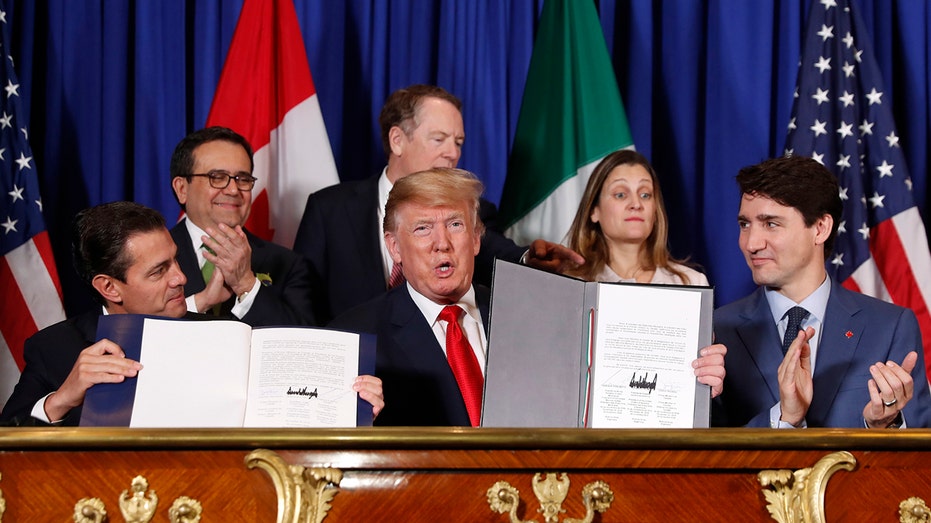 Last week, the United States Senate overwhelmingly approved the legislation to implement the USMCA on a 89-10 bipartisan vote, sending the measure to U.S. President Donald Trump for him to sign into law.

Trump made the renegotiation of NAFTA a key element of his 2016 presidential election campaign, calling it the “worst trade deal ever made,'' while blaming it for the loss of thousands of American factory jobs to low-wage Mexico.

(Reporting by Steve Scherer in Winnipeg, Manitoba, writing by Kelsey Johnson in Ottawa, Editing by Chizu Nomiyama and Bill Berkrot)