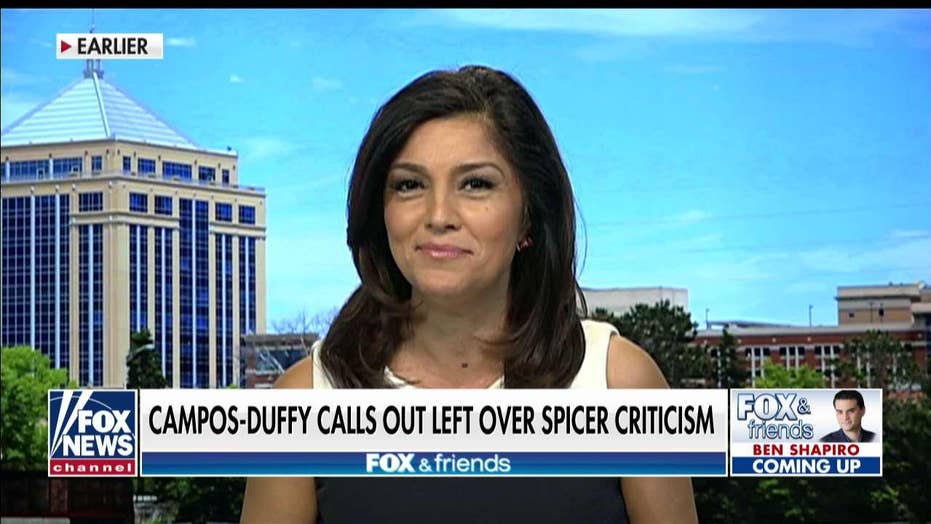 Fox Nation host Rachel Campos-Duffy called out some of the critics of former White House Press Secretary Sean Spicer after his debut appearance on "Dancing With the Stars."

In particular, Campos-Duffy took issues with some arguing that Spicer should not be given the platform on the popular show due to his time in the Trump administration.

"If you go to Twitter, they're still whining about ABC giving a platform on a show that's so popular to somebody who's not just a conservative, but a Trump supporter. The left, the resistance, those who are still so angry that Donald Trump became president, just want to erase conservatives from every aspect of life, including popular culture," she argued.

"Giving Sean Spicer that place on 'Dancing With the Stars' to let us see him in a different light, see that he's just a regular guy, they can't have it."

Co-host Ainsley Earhardt agreed with Campos-Duffy's sentiments, arguing that the show is supposed to be about having fun.

"Can't he just go on that show and have fun? Can't we watch Democrats and Republicans, who cares what administration they were with, and just enjoy it? It's entertainment," she remarked.

On Monday night, Spicer found himself sporting a neon-green ruffled shirt as he danced to the Spice Girls song “Spice Up Your Life” in a salsa routine.

Spicer told Martha MacCallum on Tuesday he had no regrets about his debut on the show.

"I went into this saying I was going to have fun. Get out of my element. I've done both. I had a blast," he said.

"Playing the bongos to the Spice Girls with a lime green shirt that's cut down the chest are four things that I never thought I would ever do in my life," he joked.

Campos-Duffy said the left wants Americans to believe that anyone who supports Trump is racist or sexist, so they reject Spicer being shown in a positive light.

18/09/2019 Markets Comments Off on Campos-Duffy rips critics of Spicer's 'Dancing With the Stars' debut: 'They're still so angry' about 2016
World News