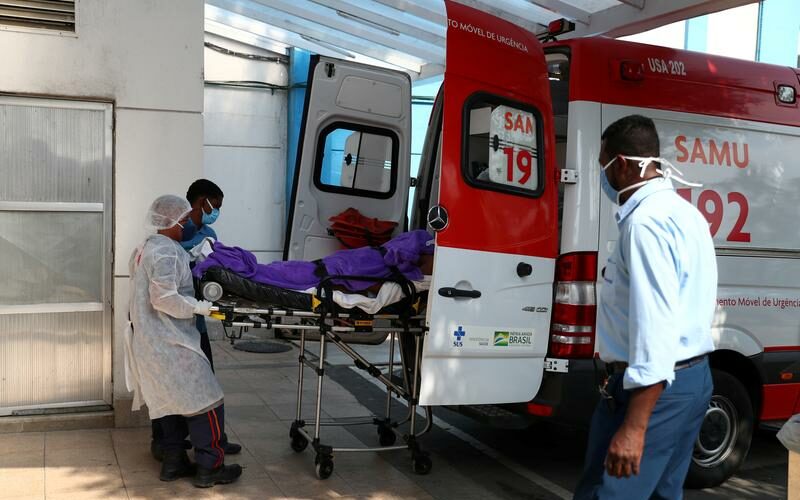 BRASILIA (Reuters) – Brazil’s health minister said on Friday the government is doing everything possible to prevent the spread of the concerning coronavirus variant first identified in India in the northern state of Maranhao, which has detected the country’s first cases.

One crew member of a cargo ship, anchored at the port of Sao Luis after a trip from South Africa, was airlifted to a hospital in the city with severe COVID-19 caused by the variant, according to Maranhao state health officials.

“This case was detected promptly, all sanitary measures were taken and we hope that there is no spread of this Indian variant here in Brazil,” Health Minister Marcelo Queiroga told journalists. “Patients and their contacts have been isolated.”

Brazil has struggled to contain homegrown variants of the coronavirus driving a deadly second wave of COVID-19, which has killed almost 450,000 Brazilians since the pandemic began – nearly half the death toll for all Latin America.

President Jair Bolsonaro has come under harsh scrutiny from a Senate inquiry investigating his government’s handling of the pandemic, including delays in procuring vaccines, which have led to a sputtering national immunization program.

Brazil’s health regulator Anvisa came under pressure on Friday from the state of Bahia to approve the Russian-made Sputnik V vaccine within seven days, a move other states in the region said is critical to tackling the COVID-19 crisis.

In a letter to Anvisa seen by Reuters, Bahia’s chief prosecutor Barbara Camardelli highlighted the arrival of the Indian variant and the “incessant rise” in COVID-19 cases and deaths, as reasons to warrant a swift decision.

Anvisa in late April rejected requests from Maranhao and other states to import the Sputnik V vaccine, citing “inherent risks” and “serious” defects, and a lack of information guaranteeing its safety, quality and effectiveness.

Governors from several northeastern states said in a news release on Friday that they are confident Anvisa will authorize the emergency import of vaccines and reverse its earlier decision on Sputnik V.